65 °F / 18 °C 8:26 PM
iFly.com
London Luton Airport LTN is one of greater London's four major airports and is mostly served by low-cost airlines & charter operators.  It is London's fastest-growing airport. Note: While Luton Airport is also referred to as 'LLA' - the Airport Code is LTN.  The Airoprt is owned and administered by the Luton Borough Council.

The Airport is located 2.8 m from the town center of the Borough of Luton, in Bedfordshire, England, U.K., and 35 miles northwest of Central London, accessible via Junction 10a of the M1 motorway and dual carriageway link to the Airport, as well as rail services to central London in only 20 minutes. Motorway M1 runs to the south to London and to the north to Leeds, and connects to the M25 motorway.

With an extended runway, and 14.5M passengers in 2016, London Luton Airport offers direct & connecting flight to all points of the globe, as well as seasonal flights to popular vacation & ski resorts. (A proposed new runway will take 'at least a decade' to open.

London Luton Airport has one two-level passenger terminal.  For Terminal details at this site open ‘Terminal Map’ and scroll down to the text;  for ground transportation open: ‘Ground Transportation /Buses & Trains.

Visa requirements for travelers from India:  Tourists, travelers on business & other eligible visitors from India will now be able to visit both the UK and Ireland (North & South Ireland) - moving freely between the two countries on a single visa.

Present & future Airport Developments:  During 2017, a range of new restaurants and shops opened /will open, while immigration hall improvements were completed.
- The ongoing Airport Redevelopment Project is to increase capacity to 18M passengers annually by 2020 - involving complete redesign of the current terminal, adding new food & drink and retail concessions; an executive lounge, and major upgrades to transport links, new multi-level carpark, remodeled bus & coach interchange and improved rail links.  Its first phase addresses landside infrastructure & transport facilities (changing the approach road to the terminal into a dual carriageway; redeveloping short-term carparks, on-airport road network & set-down area, and relocating the coach terminal.
- With a new cloud-based planning platform by CopOpt enables the Airport to carry out operational planning - resulting in better security and passenger number forecast.
- A proposed light rail link between the passenger terminal & Luton Airport Parkway - with connections there by an expresss train to Central London taking only 30 minutes are currently on the agenda.
- - In July 2017 Luton Borough Council approved construction of a 2.3km automated people-mover - connecting the terminal with the Luton Airport Parkway station - supporting Airport passenger capacity to increase by 50 percent to 18M in 2020. 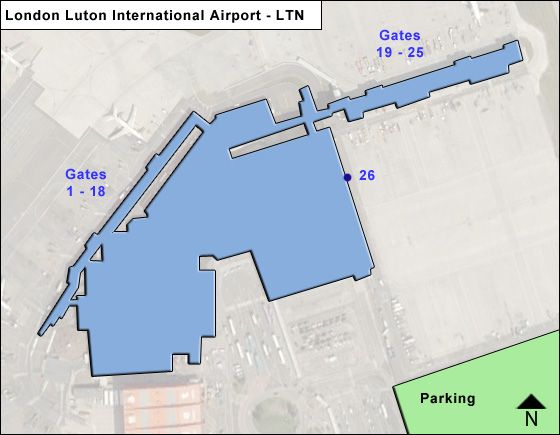 Have a question about London Luton Airport?