Long Island MacArthur Airport has a main terminal with 9 gates on one concourse.

View the full list of airlines served at ISP here.

Parking at the airport is easy and economical. We offer well-lit spaces throughout, security by airport police and handicap accessibility.

Short term uncovered parking is conveniently located across from the passenger terminal. You can pay with cash or credit.

Starting at 4:30 a.m., a free shuttle service to/from the passenger terminal (exit Arrival Avenue on the right) runs every 15-30 minutes until one hour after the final flight landing.

The rental car agencies are A-car, Dollar Rent-a-car, Budget rent-a-car, Avis, and Enterprise. They provide these services at the Islip Airport MacArthur, which is located outside of the baggage claim area.

Taxis at ISP Airport have to be booked before arrival.

Info on buses and trains serving ISP airport can be found here.

To help you have an amazing stay, Long Island MacArthur Airport provides visitors with different amenities and upgraded services including: 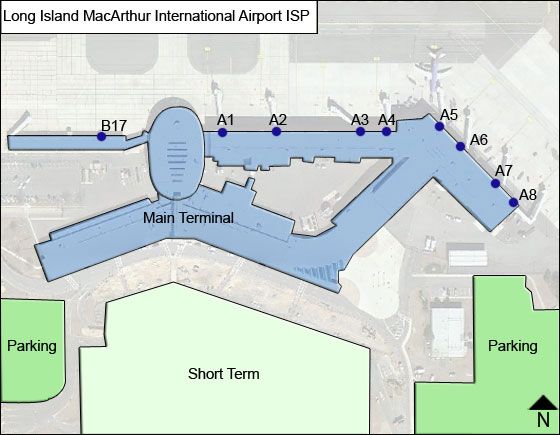