iFly.com
Medellin J. M. Cordova International Airport MDE is Colombia's second-largest Airport (after Eldorado in Bogota) - serving mainly international flights, while the old Olaya Herrera Airport serves mainly domestic flights.
The City of Medellin - with a European flavor - is a city of gardens, surrounded by pine-covered mountains - and offers great public transportation - with parks, museum, new shopping plaza & active nightlife . It is surrounded by mountains and blessed by moderate temperatures year-round (60-85 degrees). It citizens are friendly and very hospitable. Gone are the days of the drug wars and you should feel perfectly safe if using common sense.

Jose Maria Cordova Airport is located in the Sajonia Valley, municipality of Rionegro (named after the nearby river Rio Negro) - Province of Antioquia. It is 8 km from Rionegro's main park, 28 km from Santa Elena, or 40 km from Medellin (via the Las Palmas Expressway), and 45 km to Las Palmas.

With a long runway and an estimamed 20 million passengers a year*, Jose Maria Cordova Airport is served by a number of major airlines offering direct and connecting flights to all points of the globe.

The Departure Tax for international flights is around US $28 and for domestic flights US $5, payable in cash (pesos or dollars).
Local Airport contact: tel. 402 51 10

J.M. Cordova Airport has one passenger terminal, which has been continuously  upgraded and expanded. 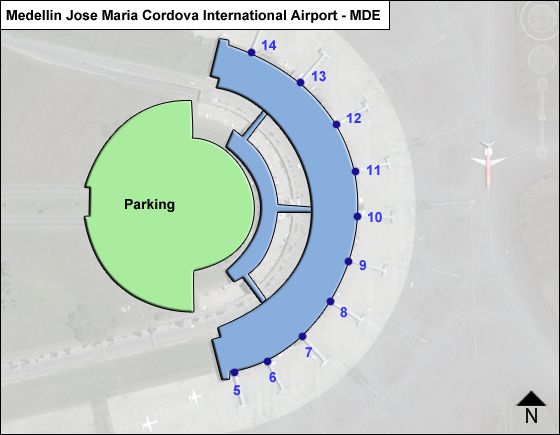