iFly.com
Nantes Atlantique Airport NTE, currently the largest airport in Western France, serves the country's Lower Atlantic region and is gateway to the famous Pays-de-la-Loire region and seaside resorts La Baule and Pornic.  While a new Airport in a rural area was to replace the current one - repeated opposition from the public have so far prevented its construction - see below.

The city of Nantes is located in the Loire Valley, noted for its Dukes of Brittany Castle, wineries, and nearby seaside resorts La Baule & Pornic.
NTE Airport is located in Bouguenais, 8 km southwest of the city of Nantes, accessible by the Nantes Ring Road (at Grand Lieu Gate) which connects to D723 & A83, as well as to N1665, N137, AA11 & N249. T

With a long runway, and 4.8 million passengers in 2016, domestic and foreign airlines serve the airport with direct flights throughout Europe, with connections around the world. Seasonal charter flights are available to popular vacation destinations.

NOTE: European citizens traveling to France will again need to have either an identity card valid for foreign travel or a valid passport.  ARRIVE EARLY - particularly during summer season - as security lanes can be long!

Nantes Airport has one passenger terminal.  For Terminal details at this site open ‘Terminal Map’ and scroll down to the text;  for ground transportation open: ‘Ground Transportation /Buses & Trains.

Future Airport Developments: Since the current Airport cannot be extended due to its close proximity to the city,  a new airport  is to be built on a 4,000 acre of protected swampland outside of the city (ending local protests ongoing since 2012).  In June 2017, voters approved the relocation, ending the long battle between Government and environmental activists. The new Airport 'Aeroport du Grand Ouest' is scheduled to open some time in 2018, replacing the current terminal. 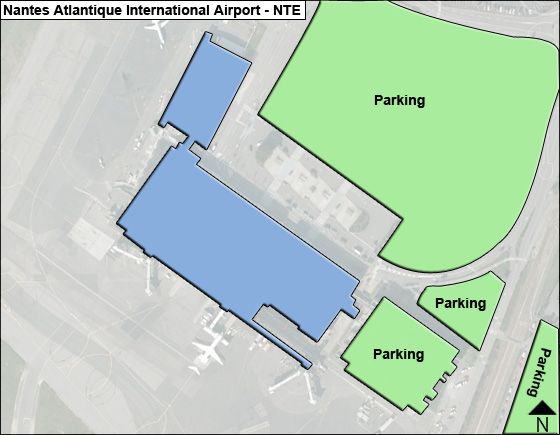