PMO Airport is located in Punta Raisi, 35 km west of Palermo, the capital city of the Mediterranean island of Sicily, Italy. If you drive to the airport and you come from from Palermo, take the A29 Hwy towards Trapani; if you come from Trapani, take A29 towards Palermo; in both instances take the exit marked as 'Puntaraisi - Aeroporto Falcone e Borsellino'.

With 5.3 million passengers in 2016,  and two runways, Palermo International is served by a host of domestic and international airlines offering direct and connecting flights to destinations around the world.

Palermo International Airport has one passenger terminal.  For Terminal details at this site open ‘Terminal Map’ and scroll down to the text;  for ground transportation open: ‘Ground Transportation /Buses & Trains.

NOTE:  To avoid missing your flight - due to increased security measures, passengers must arrive at the Airport one hour (for domestic) and 2 hours (for international) flights!

* Trains:  The Airport is directly connected at its basement level to Sicily's railway system. Note: As trams returned to the City, the suburban rail projects takes shape. Currently the project to create a circular line around city center for the Anello rail line is 80 percent complete.  Late July 2017 the tunnel's cover was installed.  When it opens some time in 2018, the train will run every 30 minutes. However, there will be olny a single-track line, with service in one direction. 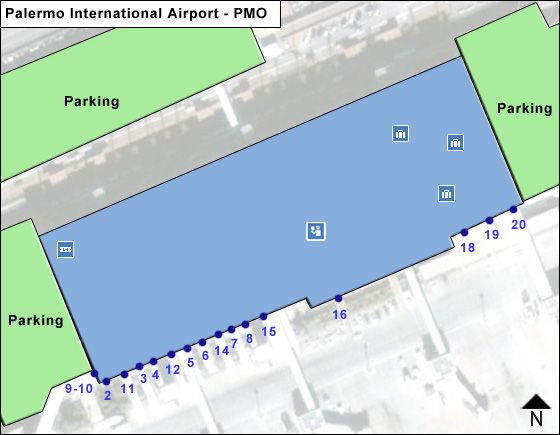