SDQ Airport is located in Punta Caucedo, near Boca Chica, and 20 km southeast of the capital city of Santo Domingo, situated on on the island of Espanola (shared with Haiti), which is one of the Greater Antilles islands in the Caribbean Sea. From the City, take Highway 27 de Febrero to Route 3 to the Airport. You can also take the more scenic route on the coastal shore, which crosses the Ozama River via a floating bridge connecting traffic onto the Av. George Washington (el Malecon) leading into the city center.

With a long runway and an estimated 2.9 million passengers yearly,  Santo Domingo Las Americas International Airport is hub for PAWA Dominicana*, and is served by many inter-island & international airlines offering direct and connecting flights to to all parts of the world.  JetBlue is currently the largest airline serving SDQ.

Santo Domingo Las Americas Airport has one integrated passenger terminal.  (For more informtion, open 'Terminal Map' and scroll down to the text.)
The Operation Center can be reached at 809-947-2220.
Parking options include short- & long-term facilities across from the terminal complex, including a rental car lot.

NOTE:  Santo Domingo is aiming to make its Airport into a major Caribbean air hub - intended to 'consolidate the country as the region's top tourist destination' and working toward the goal of 10M visitors annually. 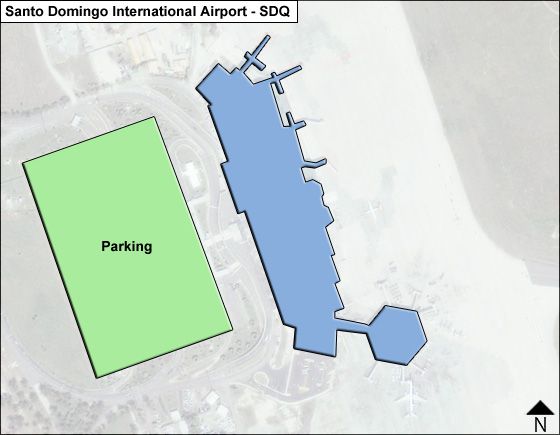