The terminal building structure at the Dublin Airport has two main terminals - Domestic Terminal 1 and International Terminal 2. Both the terminals are connected by a 100m long walkway available at the DUB airport which takes around 5 minutes of walking time.

The upper level of T1 is the Departures level and has at its center entrance the airline desks, to the left currency exchange and adjacent escalator to Arrivals/ Area 14. Behind the airline desks are the 6 rows of check-in counters 3 throuth 13 and beyond counters 3-4 is the Fast Track Entrance with access to The Loop & to departure gates. Note that T1 now added 15 more self-service bag-drop units for Ryanair passengers, and 3 separate baggage-drop units at check-in Area 7 for common-use by airlines (like CityJet and Flybe).

The ground level of T1 is the Arrivals level which houses the baggage hall with carousels 4 - 1 and 5 - 9 on either side of the center, which has security screening leading to Arrivals meeting point and information counter. This level also houses a cafe, ICE currency exchange, a book shop, ATM machine, Bank of Ireland, pre-booked rental cars and rental car counters, Information desk, Tourist & transportation information, & a bar.

The ground level of T2 is the Departures level which houses the check-in counters at the center. Some airlines help desks and check-in desks 1-18 (right) and 29-56 (left). The Departures Hall houses the Security Screening area & a Fast-Track entrance. Access to gates 401-426 is in the center, past the concessions (gates 401-406 house U.S. Customs & Border Protection). The departure hall leads to car parks and transportation facilities.

The upper level of T2 is the Arrivals /Baggage level which houses the Customs before which is a corridor for flight connections to Terminal 1. After Customs inspection are baggage crousels 1 - 6, a currency exchange, 2 baggage handler service desks, a Loop shop, and access to the Arrivals Hall, which houses in the center a meeting point and at either side food & drink and retail concessions.

There are many options for shopping and dining around DUB airport. Some notable shops and restaurants include Butlers Chocolate Café, Café Bar, Boots, and Food Village inside Terminal 1; and Irish Meadows, Caffé Nero, WHSmith, and Coffee Room at Terminal 2. Online click and collect options for shopping items are provided by The Loop.

The hours and wait times estimates for each security checkpoint can be found on the Dublin Airport Security Wait Times Page.

There are three airport lounges at DUB airport. The Lounge is an airport lounge that can be found at two locations: on the second level inside T1 between the lanes of the security checkpoint and inside Terminal 2 on the second level near the 400s gates. Terminal 2 has another lounge called 51st & Green US Preclearance, which is located after US Preclearance.

Terminal 2 is the main terminal handling all international flights without any requirement of preclearance of customs. For more information about this terminal, please scroll up. 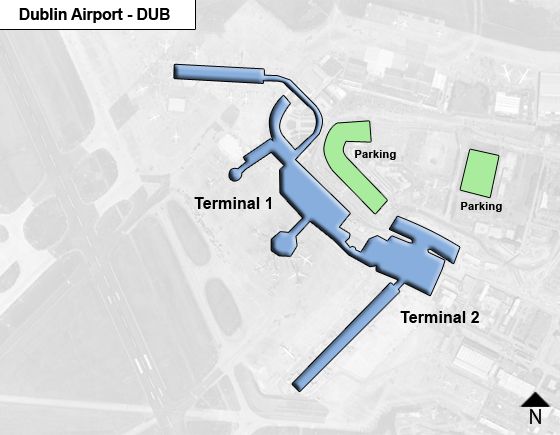