The terminal building structure of the Columbus International Airport has two levels and houses three concourses: Concourse A, B, and C.

The two-story building of the CMH Airport terminal provides the following:

International Arrivals is near the Meditation Room (between bag carousels 5 & 7).

The ticketing level houses the nine check-in counters and an Information Desk in the center. The airline counters for American, Frontier, Alaska, and Frontier airlines are towards the left of the information desk, while those for United, Air Canada, Spirit, Vacation Express, and Southwest, are on the right.

There are three security checkpoints each leading to the three Concourses of the airport: checkpoint C is to the left, checkpoint A is to the right, and Checkpoint B is beyond the check-in counters at the center.

Concourse A lies towards the southeast (right from the entrance) of the ticketing level and has six gates labeled gates A1-A6. This Concourse is served by Southwest airlines. Services include restrooms, ATMs, and nursing rooms.

Concourse B lies towards the center of the ticketing level and has twenty gates labeled gates B17-36. This Concourse is served by Air Canada, Spirit, United, and American airlines. Services include restrooms, ATMs, and nursing rooms.

Concourse C lies towards the west (left from the entrance) of the ticketing level and has twenty gates labeled C46-C56. This Concourse is served by Alaska, Delta, Frontier, and Vacation Express. Services include restrooms, ATMs, and nursing rooms.

There are many options for shopping and dining around CMH airport. Some notable shops and restaurants include CNBC News Store and Donatos Concourse A; Capital City TravelMart, Charley's Philly Steaks, and Starbucks in Concourse B; and Best Buy Express and Columbus Marketplace in Concourse C.

The hours and wait times estimates for each security checkpoint can be found on the Columbus International Airport Security Wait Times Page.

There is one airline lounge inside the CMH airport called the Jake Brewer USO Lounge. This can be found in the presecurity area outside Concourse C on the ticketing level.

International Arrivals is near the Meditation Room (between bag carousels 5 & 7) on the baggage claim level. 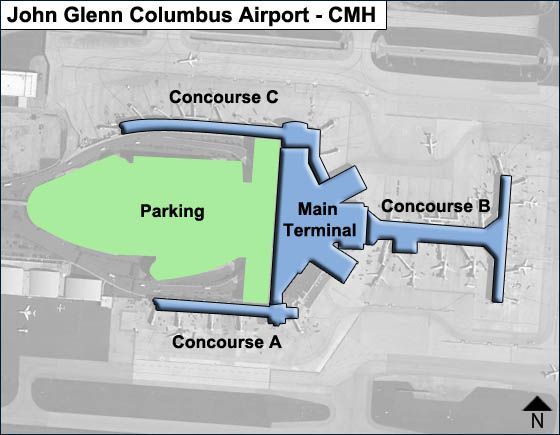 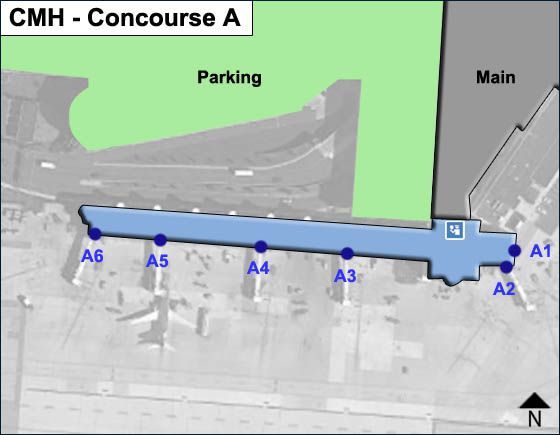 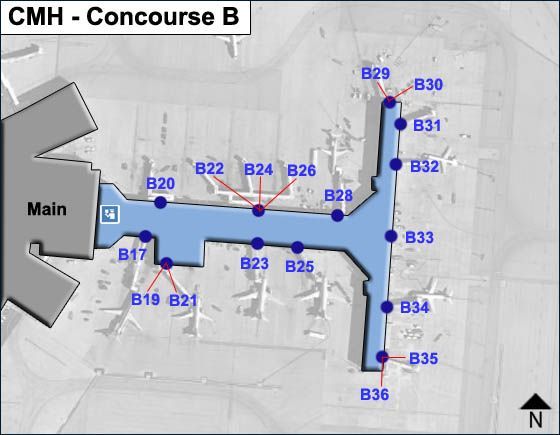 Have a question about John Glenn Columbus Airport?