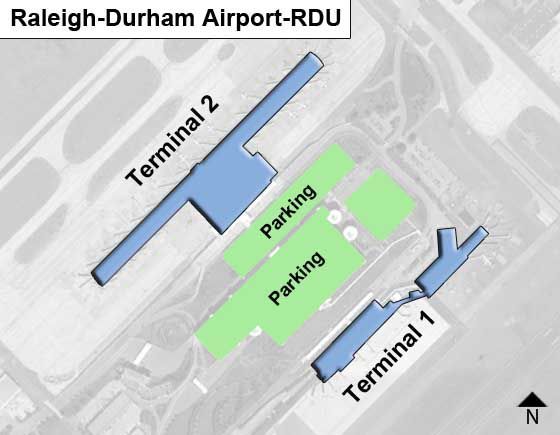 The passenger terminal complex at Raleigh-Durham International Airport consists of two terminals - T1 & T2 (with adjustable jetbridges). As the two terminals are not connected, they are served by separate shuttle buses for each way: the orange Bus 4 runs from T-2 to T-1, while the purple Bus 3 runs from T1 to T2.

The newly modernized Terminal 1 of RDU officially opened 2014 has one concourse with nine gates and panoramic view of the airfield; a security checkpoint with 4 lanes is on level 2; ticketing & baggage claim areas were upgraded; new shops & restaurants were added in both pre- & post-security areas; and abundant natural lighting, as well as electrical outlets in seats at boarding area installed.
The ground level of T1is divided between ticketing & baggage claim, and houses Southwest Ticketing counters & Southwest baggage service, ATMs, smart carte, food & rink outlets & vending machines.  In the center is access to the parking garage via tunnel, and a meeting point to the right of it.  Outside of T1's ground level are the following transportation zones:  1 for prearranged services, 2 for hotel/motel shuttles, 3 for Park & Ride, 4 for limos, 5 for rental cars.
The Concourse level with A gates has a security checkpoint and offers ATMs, shoeshine, a cafe, restaurants & Starbucks, and access to gates A1-A9 - currently only used by Southwest Airlines.

Amenities & services in T2  include ATM machines & currency exchange, optional WiFi access (45 mins free; or 24-hr premium paid connection, or Boingo monthly plan); a convention desk, shoeshine, a USO of NC Center, an attractive meet-an-greet area with Starbucks table seating, three international gates and a new and much larger processing area, which no longer requires rechecking bags or entering the concourse. T2 also offers XPresSpa, and an easy-to-read new plasma display. A set of universal kiosks support check-in with multiple airlines, in addition to airline-specific kiosks. T2's departure area has a good variety of shops & restaurants; The Redbox near gate C7 lets you rent a movie for $1/day. Select seats are equipped with power outlets, and boarding areas have seating clusters with 110 volt and USB power outlets under the tabletop surfaces.