Flights are available from the airport to cities in North America, Europe, the Middle East, Asia, and Oceania. Alaska Airlines, whose headquarters are located near the airport, uses it as its primary hub.Due to rapid growth in the Pacific Northwest, Sea-Tac International Airport is attracting more flights and airport lounges to serve passengers before they board. Delta Air Lines has made Seattle a major focus of its reach into new Asian markets, while American Express has installed one of their highly acclaimed Centurion Lounges. Meanwhile, Alaska Airlines and United Airlines have shuffled gates and, as a result, each built new lounges. Let us take a look at the lounges that SEA airport has to offer

So it should come as no surprise that there are a total of 10 airline and club lounges located within 4 concourses.

Below you’ll find Airline and Airport Club lounges at SEA listed, along with their hours, locations, and amenities.

The following airlines operate lounges at Seattle Tacoma Airport: Keep in mind that airline lounges may offer entry to passengers flying on their code-share or alliance partners.

This new United Club opened after United Airlines consolidated its operations in Concourse A, across from gate A9. Heading upstairs, guests are invited into a sleek, modern space - this was actually the second lounge to feature the new design concept unveiled in 2013. The space is narrow but a significant improvement over the former basement lounge in the North Satellite.

One-time passes can be purchased for $50 at reception. Membership fees are $550 per year but can be reduced with elite status.

A warm welcome to the Alaska Lounge at Sea-Tac’s Concourse C. Enjoy the latest addition to Alaska Airlines’ growing lounge network, complete with a beautiful modern design, views of the runway and mountains, a full bar, and of course, the classic pancake machine. Immerse yourself in the tranquil surroundings and take a moment to relax, grab a bite to eat, or catch up on work.

The main lounge in Concourse D is spread across two floors with a fireplace, two conference rooms, and art by SeaTac native Dale Chihuly. The lounge has its own elevator to move between floors, but some will find the stairs more efficient.

Upstairs is the livelier area with a walkup bar, televisions, and a more expansive food selection that includes pancakes in the morning and hot soup and salad in the evenings, along with other all-day snacks. A scattered mix of low chairs and tables allows visitors to sit in groups.

Recently opened in a temporary space in the North Satellite to reduce crowding; it will be replaced by a permanent lounge once the North Satellite is renovated (expected to last through 2020). This space is a little smaller and has a decidedly different style, with white walls and blonde wood. A waterfall greets passengers as they enter. To the left are several televisions, a snack bar, and a mix of bench seating, chairs, and a long wooden table. The bar is located to the right, and unlike the main lounge, it features a row of bar stools so you can watch the game while you enjoy a pint. Coffee and self-serve soft drinks are around the corner. Due to limited space, this lounge has a single restroom.

Delta began a significant capital investment campaign in its lounge network several years ago, and the Sea-Tac location is one of those more recently renovated. It's also among the most expensive locations to visit with a one-time pass or to purchase a membership. However, it is also one of the few lounges with shower facilities.

Entering the lounge, you'll find a bright blue and white color scheme with two seating areas separated by a long, raised table with its own power outlets and stools. The main seating area contains scattered chairs with high walls that provide additional privacy and a pop-out table to rest your drink. Another row of chairs runs along the window. The upper seating area contains more traditional low-rise chairs with coffee tables that are ideal if you're visiting with a companion and want to chat.

Customers traveling on Delta Air Lines and other SkyTeam carriers on international itineraries, as well as Sky Club members. One-time passes can be purchased for $59. Complimentary access is provided with the American Express Platinum Card when flying on Delta.

British Airways provides one of the more premium lounge experiences (Terraces, First) at Sea-Tac due in part to its exclusive service to international passengers. The bartender will make anything you request and maintain a collection of fruit and mixers as part of a fully stocked bar. Sandwiches and hot food are provided in addition to an extensive collection of snacks and cookies.

This is one of the few lounges with a direct view of the runway, but aside from this and the snacks, the large curving space is one massive collection of padded chairs with some tables. Some of the chairs are oddly mismatched, which may be a design choice or just an indication that its time to renovate. A small "business center" in the back consists of two computers and a printer on the shelf. The lounge can get busy before departures but is almost never filled to capacity.

Customers traveling on British Airways and other oneworld carriers on international itineraries. Some other airlines may have access agreements with this lounge.

Over $1.5 million in donations helped renovate the lounge in 2015. Fun fact: decking from the USS Colorado was repurposed to cover 1,500 square feet of flooring in the updated lounge. The lounge is 7,500 square feet in its entirety. It now offers showers, sleeping facilities, luggage storage, game equipment, meals, computers, and a family room.

Active duty military personnel and their dependents with a boarding pass. Additional groups may be permitted on a space-available basis. Members of the military and their families may use the USO Center located outside security in the main terminal.

The Club At SEA

The Club is an independent lounge (part of the Airport Lounge Development network) and one of three airport lounges located in the South Satellite, where the majority of international flights depart. As a lounge primarily intended for premium cabin passengers, the selection of food and drinks is superior. There is an actual wine menu, fresh fruits and vegetables, cookies, and a variety of packaged snacks.

The Club At SEA (South Satellite)

One-time passes can be purchased here or with the LoungeBuddy App for $35. Complimentary access is provided by several international carriers that do not operate their own lounges at this airport.

• Access is permitted 3 hours prior to scheduled flight departure

• All children must be accompanied by an adult

The Club at SEA (Concourse A near Gate A12)

Domestic passengers, particularly those on United Airlines, will find The Club in Concourse A more convenient and much more spacious. Located near the end of the pier, it is also upstairs with a view of the concourse, much like the United Club. (As a caveat, the pier may not be convenient depending on where you need to be. The South Satellite will be easier to access with the inter-terminal train if your flight departs from Concourse B.)

One-time passes can be purchased here or with the LoungeBuddy app for $35. Complimentary access is provided by several international carriers that do not operate their own lounges at this airport.

Customers with an American Express Platinum or Centurion Card may visit the Centurion Lounge. 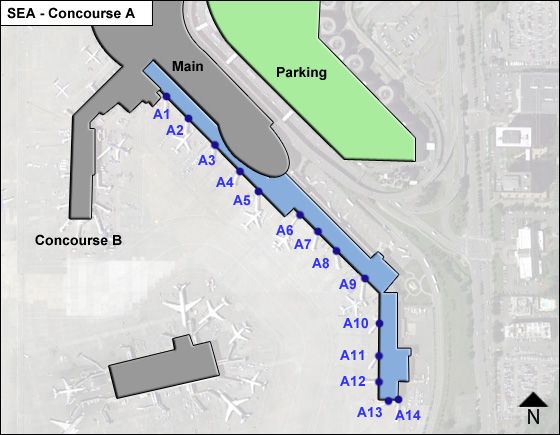 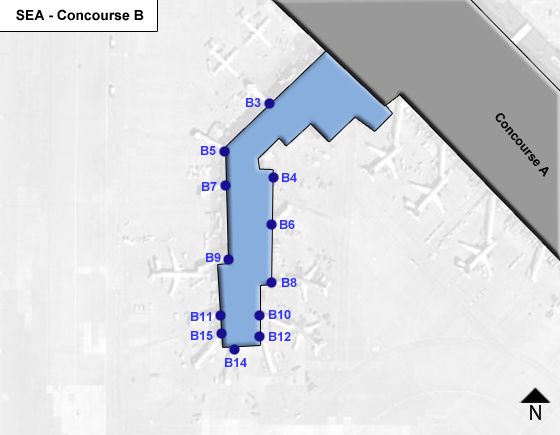 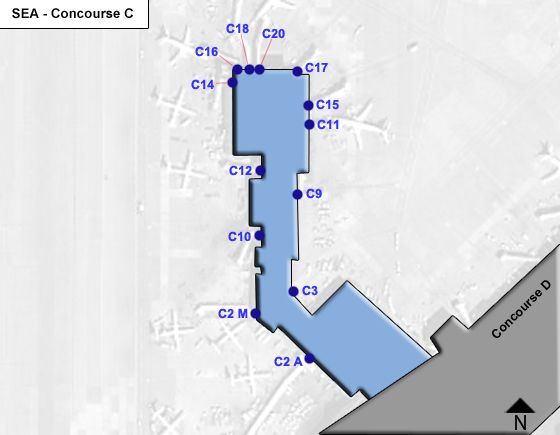 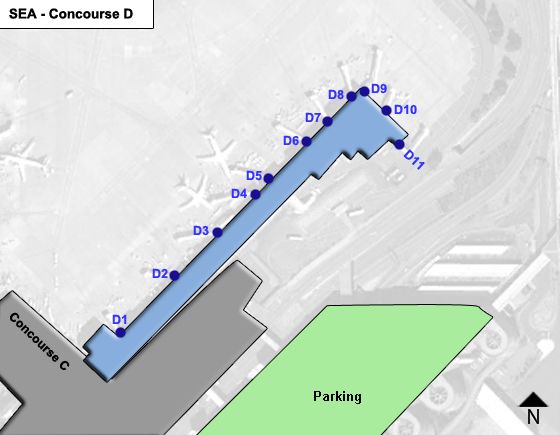 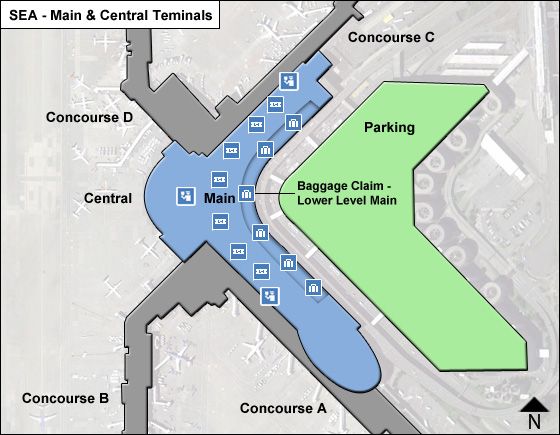 Submit a lost property report and our Airport Lost and Found Office can help! If your item was lost on the aircraft you will need to contact your airline directly, but if it was lost at the security checkpoint or in the terminal it will be at our airport lost and found!
Arrive two hours before your boarding time for domestic flights and three hours before for international flights. Get here early so you'll have plenty of time to check in, go through security, find your gate, and explore our shops and restaurants! Use our interactive map to find your way around the airport!
You can request a gate pass from your airline directly, each airline has their own policy on gate pass requests which usually supports travelers who may need additional assistance. The SEA Visitor Pass Program is temporarily suspended due to COVID-19, please reach out to your airline to coordinate a gate pass until further notice.