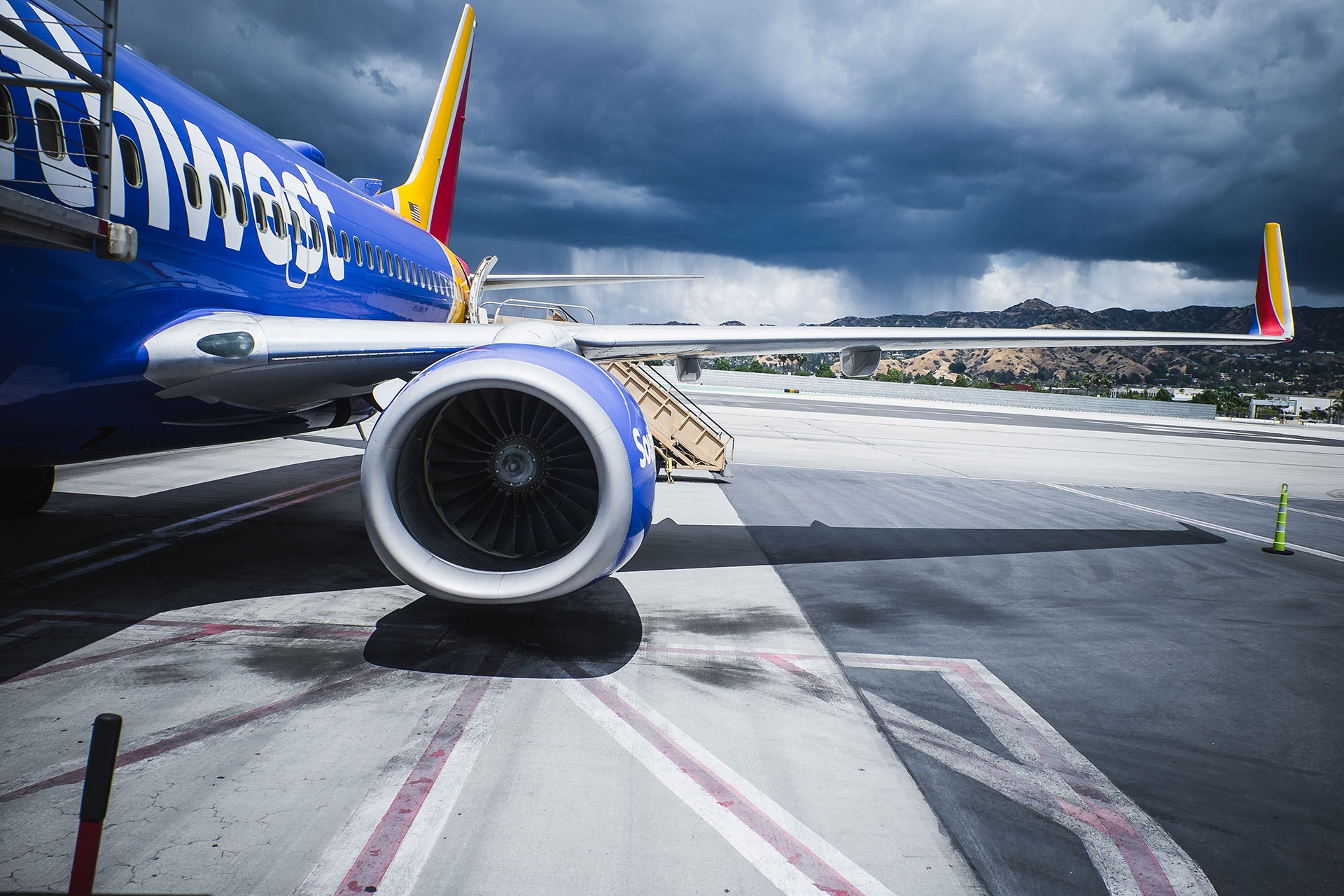 With its headquarters in Dallas, Texas, Southwest Airlines is the largest low-cost airline in the world at present. Starting with only three carrier jets, the airline has made a name for itself in the United States and has held up its title to carry the most domestic passengers in the states since 2018. The airline covers more than a hundred domestic routes and flies to 10 additional countries as of 2022.

How Southwest flight status works behind the scenes:

Using real-time on-board GPS tracking systems running on ADS-B technology and GPS satellite tracking technology, passengers can get the status of Southwest’s flights for any of its fleet of 737 Boeing aircraft.

These aircraft are equipped with embedded sensors, which send positioning and other data to receivers on land or satellite-based. Our online flight tracker extracts the location of an aircraft in real-time and transmits the data to a user's browser, providing flight status and position tracking.

Whether you are an in-transit passenger checking a connecting flight's status, or a friend or family member waiting on the arrival of an arriving passenger, you can gather all required information about a flight using the online flight tracker, on any connected device. The flight tracker allows passengers to track the location, flight status, and routes of flights in real-time to stay up to date with the latest information.

The system is designed to ensure that the passengers and their loved ones stay up to date with the location of the plane at all times. So instead of calling the customer support helpline, you can simply hit the internet and learn about your flight details within minutes. The process is simple, straightforward, and hassle-free for all.

Southwest Airlines started small with the goal of flying in Texas between San Antonio, Dallas, and Houston. But over the past five decades, the airline has made a name for itself by becoming one of the largest airlines in the world in terms of passengers, fleet size, and routes.

With a fleet size of 737 Boeing airplanes, the Southwest's route system spans more than 105 destinations in 40 states, Puerto Rico, Mexico, Central America, and the Caribbean. One thing that separates the airline from others is that it focuses on a point-to-point system and doesn't use the hub and spoke system of major airlines.

Starting from only Dallas, Texas, at present, the airline has nine operating hubs that connect passengers from all around the country, making flying accessible to all. In late 2020, Southwest started service to Miami International Airport and Palm Springs International Airport. Other than that, services to other major airports are also scheduled to start in the coming years.

The long history of service of Southwest Airlines can be traced back to 1967. It all started when Herb Kelleher and Rollin King met in a bar and drew a business plan on a napkin. It was nothing but three lines connecting Dallas, Houston, and San Antonio – the Texas circle! The initial concept was named Air Southwest in 1967 and had to go through a number of legal and financial battles with rival airline groups in the aviation industry.

But this novel idea only worked in Texas because before 1979, the federal government at the time controlled interstate air travel and also decided the fate and the routes for all airlines. All that changed after the passing of the Airline Deregulation Act, and Southwest began to win passengers' hearts from other states in the country.

Since day one, Southwest had one true mission: to become a low-fare brand, making it possible for passengers to travel for all the important reasons in their lives—work, vacations, weddings, births, and deaths or simply to explore the world. And it has achieved its goal as the largest low-fare carrier in the world, operating 4,000 departures in a day during the peak travel season.

You may carry (a) on one bag up to 10x16x24 inches, or 50 linear inches; (b) one personal item (briefcase, garment bag, laptop computer, purse or small backpack) and (3) camera, umbrella, diaper bag, assistive devices, outer garments, reading material & on-board food. All items must fit either into the overhead bin or under your seat. If baggage cannot be safely stowed it will be moved to to the aircraft's baggage hull, considered as checked baggage, and charged accordingly.

Luggage checked curbside or at ticket counter under 30 mins prior to departure will be tagged as Late Check-In. These US Airports require a 45-minute check-in: Baltimore/Washington, Chicago Midway, Denver, Las Vegas, Los Angeles, Phoenix, Orlando & Washington Dulles. If late-tagged baggage does not arrive at your destination, passenger will have to pay delivery charges.

Southwest manages to operate via nine hubs in the United States and nearby countries. But the airline doesn't like calling the airports as hubs since there are many other airports in the country busy with Southwest flights. But based on a report released late 2020, these are the following operating hubs at present:

You can track the arrival of your flight in real-time, using the online flight tracker.   Just enter your flight number (example WN 439, where 'WN' is the call sign for Southwest) to track whether your plane has arrived, is delayed, or is boarding.