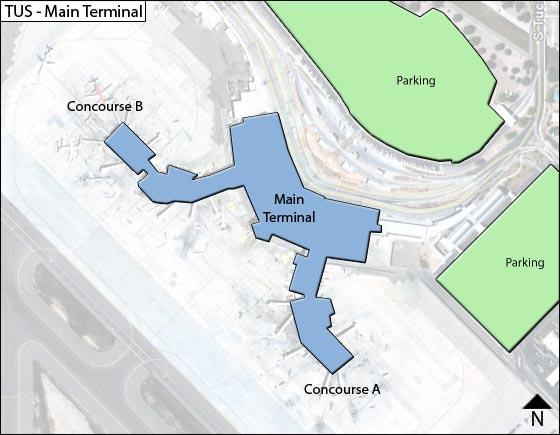 Tucson Airport has a 3-level Main Terminal with Concourses A & B.  Levels 1 & 2 are divided in the center according to the airlines serving either the A or B gates located on opposite sides of Level 2.  Food & drink & Paradies shops are available on levels 2 & 3 and in the concourses.  Free WiFi access is available throughout the terminal.
Many changes will happen until the end of 2017 - please refer to 'NOTE:' and 'Future Restaurants & Shops' outlined below.

Level 1 /ground level, is the Arrivals level, with baggage carousels 5, 6 & 7  at left,  and 4, 3, 2, 1 at right.  2 small Welcome Lounges are on opposite sides - intended for meeters & greeters; it also houses the Information counters and rental car desks, and has a connector to the rental car pick-up.  A Military /USO lounge is in the back of the baggage level.
Level 2, the ticketing level, offer separate access to concourses A & B. The gate waiting area offers 'Tech for Takeoff' display kiosks, offering last-minute purchases.
*Concourse A houses Gates A1 to A9 and is presently served by  Southwest airlines & by United;
*Concourse B houses Gates B1 to B11, and is presently served by American, Alaska, Delta..
Level 3 houses meeting rooms, restaurant and a shop.

*NOTE:   While American check-in counters already moved from east end to west end of terminal  and its flights use Concouse B - United's flights now use Concourse A.  Also, United will move to the east end of the terminal upon completion of that area.  (American is now the first Airline as you drive towards the terminal & United will be the last).  Ongoing projects until Nov. 2017 - done in phases - will include:
- Relocating / expanding security checkpoints to either end of the terminal and checkpoints expansion to four lanes.
- Improving concession spaces, including adding a pre-security restaurant and combined gift shop in the center gallery.
- Adding more post-security amenities (better concessionaire options and designated areas for a business center and children's play area.
- Adding 'composure areas' immediately after security checkpoints for passengers to gather their belongings.
- Providing for natural light with more windows overlooking airside
- Using an open design for increased terminal visibility (from center core to either checkpoint and view of the ramp from checkpoints)
- Using Arizona color palette and natural materials
- Adding self-directing wayfinding with colored terrazzo.

Future Restaurants / Shops Concept: Tucson Airport is to upgrade its retail & restaurant offerings. Its retail concepts are to reflect the Tucson region, with traditional mercado and tienditas (markets & small stores). Among the stores' offerings will be travel essentials, newsstands and  local shops for souvenir, jewelry and sporting goods. Items sold will reflect have the same prices as offered in the city.   Current operators are scheduled to  close by late February 2017, making way for construction of  new concessions by March 2017 - to be completed in phases throughout that year.
- Local Brands will include Beyond Bread, El Charro Café, The Maverick, Noble Hops, Sir Veza’s Taco Garage, Thunder Canyon Brewery and Arbuckle’s Coffee
- National brands will include Bruegger’s Bagels, BUILT Custom Burger, Dunkin’ Donuts and Pie Five Pizza).