iFly.com
Wellington International Airport WLG, which calls itself the 'Wild at Heart Airport', serves the North Island of New Zealand and the country's capital city Wellington.

WLG Airport is located in Rongotai, at the southern tip on the North Island, 7 km southeast of central Wellington, and accessible from the city by State Highway 1 via the Mount Victoria Tunnel on Calabar Road.

With a medium-sized runway and 5.8 million passengers in 2016, Wellington International is served at present by Air New Zealand,and other airlines offering direct and connecting flights to all points of the globe.

Wellington International has one passenger terminal.  For Terminal details at this site open ‘Terminal Map’ and scroll down to the text;  for ground transportation open: ‘Ground Transportation /Buses & Trains.

Present and future Airport Developments: The  8-level carpark with parking guidance system and EV charging stations- located next to the passenger terminal - is to be completed by June 2018.
The runway extension is in the drafting stage. 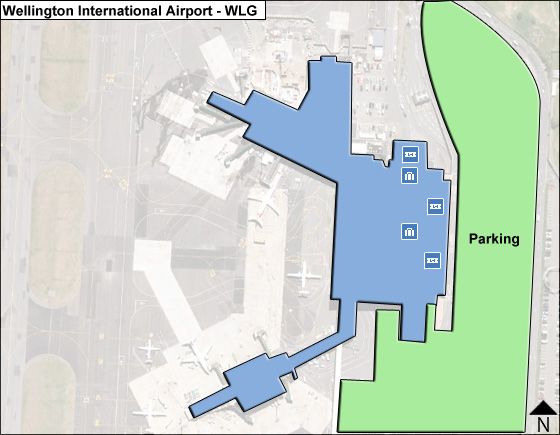