RFD Airport is owned and operated by Greater Rockford Airport Authority. It covers an area of 2,900 acres (1,200 ha).

Chicago Rockford International Airport has a main terminal with 5 gates on one course.

View the full list of airlines served at RFD here.

The paid Parking lot is one of the most convenient parking options at RFD Airport. The parking lots are located directly in front of the Main Terminal Building and the International Arrival Terminal.

The first two hours are free.

$1 for each additional hour.

Another comfortable option to park at Chicago Rockford International Airport is the valet parking and can pay with cash or credit card.

The rental car agencies can be booked for pick up and reservation at Chicago Rockford International Airport. Avis, Alamo, National, are some of the well-known providers for rental cars.

Taxis at RFD Airport will be available on call to make arrangements for the trip.

The Rockford Mass Transit District has hourly service to and from RFD, six days a week. The bus stop is located directly in front of the terminal, at the east end of the service drive. Passengers have to take the South Main Bus #7 to the RMTD Transfer Center on West State Street. Then switch to the East State Bus #11 and get off at the Greyhound or Clock Tower stop.

To help you have an amazing stay, Chicago Rockford International Airport provides visitors with different amenities and services including: 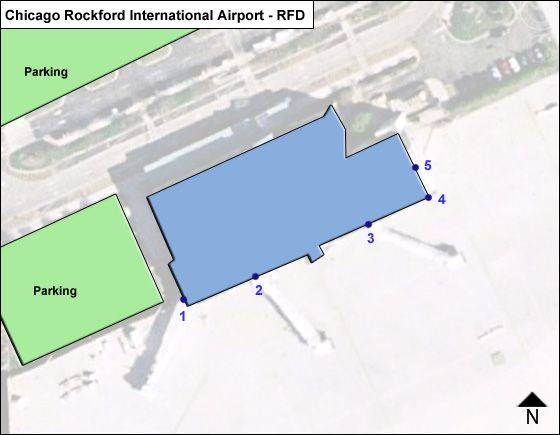 If you need assistance there is security to assist you before and after the checkpoint but you can look for RFD ambassadors in bright green shirts or any RFD personnel.
Yes, there are wheelchairs available at RFD airport. You can ask for one free of charge inside the entrance or ask an ambassador for assistance.
Call your airline, visit their ticket counter, or contact an airline customer service agent for further information. Lost baggage is the sole responsibility of the airline you are flying. Please contact [email protected] or call 815-969-4412.