iFly.com
Shanghai Hongqiao International Airport SHA serves the greater area of the City of Shanghai in Central-East China, covering an area of 26 square kilometers. As  one of China's busiest Airports, it represents one of two Shanghai Airports (the other being Pudong). Hongqiao markets itself as 'most user-friendly airport in China'.
Hongqiao Airport goes back to the original Shanghai airport, started over 80 years ago.  As passenger traffic grew, a second airport was built  - the Pudong Airport (40 km from Shanghai). The two airports mainly differ in that Pudong has taken over the bulk of the international flights, while Hongquiao, closer to the city, concentrated mostly on domestic flights. However, Hongqiao, after extensive renovation, has become one of the four busiest Airports in China and now also includes some international flights.

NOTE: both Hongqiao & Pudong can be reached by the same hotline: 96990

SHA Airport is located in Puxi, Changning District, and is 13 km west of downtown Shanghai, situated close to the China Sea. The Airport is truly an integrated transport hub for shuttle and long-distance buses, the Metro, and connection to the Bullet train.  Speedy accesss to/from the Airport  is available via the expanded Metro train lines 2 & 10 (Line 10 serves both Terminals and interchanges with Line 2 at Terminal 2).

With two very long runways and 40.5 million passengers in 2016, Hongqiao International is hub for China Eastern, Shanghai Airlines & Spring Air, and is served by domestic, Korean & Japanese airlines, offering direct and connecting flights to all points of the globe.

On-Airport hotels:
- The 5-star Shanghai Hongqiao Airport Hotel - with 456 rooms & 12 conference rooms - offers access inside Terminal 2 - with check-in counter service & an exclusive security lane in the lobby, the process taking no more than 30 minutes.
- The newly upgraded Mercure Shanghai Hongqiao Airport Hotel- with 224 rooms and a restaurant on level 1 is located opposite of Terminal 1's entrance (tel. +86 (021) 6268-2266.
- The Shanghai Marriott Hotel Hongqiao is only 2 km from the Airport (tel. 021) 6237 6000.  It also offers a fitness center & steakhouse.

NOTE:
- China has granted a 72-hour 'visa-free transit' for nationals of over 50 countries, including the U.S.
- Same City - Same Price:  Shanghai's chain stores and restaurants at both Pudong & Hongqia Airports pledged to to keep prices on par with those they charge in the City. Also, 20 international food chains & convenient stores agreed to this arrangement.

Present and future Airport developments:  Renovation on Terminal 1 was completed in March 2017 - adding a 2,000 sq.meter duty-free store for international passengers, and offering shower & changing rooms.
- An 800-km rail network - with a rapid rail system to connect both Pudong & Hongqiao - is planned for 'the next decade'. 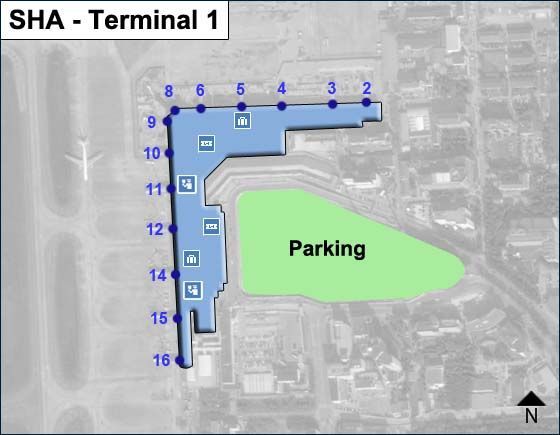 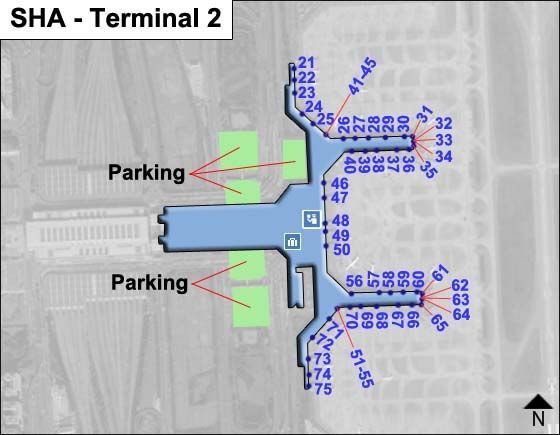 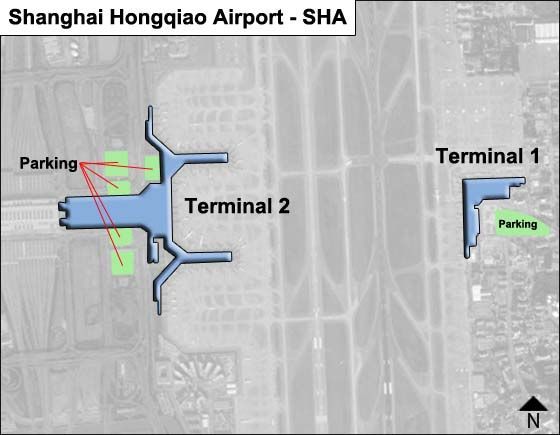