72 °F / 22 °C 12:04 AM
iFly.com
Istanbul Ataturk International Airport IST is named in honor of Mustafa Kemal Ataturk, founder and the first president of the Republic of Turkey. Ataturk International is one of two Istanbul airports (operated by TAV) - the other is the smaller Sabiha Gokcen Airport located at Istanbul's Anatolian (Asian) side.
If you come to the City to see the sites, stay a few days at least. You will find not only the tourist sites breathtaking, but its people fascinating and engaging and the food to be a culinary adventure. Ataturk Airport was selected as 'Best Airport for Business Travellers [within Europe]'; and was given the  'Airport of the Year' award. In March 2016 it received the ASQ award for service quality and dedication to cultivating outstanding journey for passenges from curb to boarding. Turkish Airline was awarded in 2016 'Airline of the Year'.

IST Airport is located in Yesilkoy, on the European side of the city - 28 km from downtown Istanbul, the great and historic city on the Bosporus where two continents and East and West meet. You can reach the Airport by coastal road 'Ataturk Havalimani Cd', connecting to the north motorway D-100 and the TEM (Trans-European Motorway).

With three runways and 60.1 million passengers in 2016, Istanbul Ataturk Airport is hub to Turkish Airlines (with 2016 'Airline of the Year' award) and Onur Air, and is served by many major international airlines offering direct and connecting flights to all parts of the globe.

On-Airport Hotels:
- 'Instanbul Airport Hotel' (tel. +90 212 465 4030) is right next door, attached to the International Terminal at its left side.
- 'TAV Hotel' (tel. +90 (212) 465 4030 or visit airporthotelistanbul.com) is situated partly at airside, and partly at land-side with a total of 131 rooms; all rooms show flight information, with internet access & can be used on a daily or hourly basis.  The land-side included fully-equipped meeting rooms, convertible into one single room.

Istanbul Airport has a Domestic & an International Terminal.

NOTE:
- For a Google Street View of the Airport and its surroundings visit Google Maps online, then add in the search box on top 'Istanbul Ataturk Airport'. You will then see a yellow human figure: drag the sign onto the map - some areas will turn blue, which are for street view. For closer view, drag the yellow figure to the area you are interested in.
- A Verified Skytrax review of a passenger in April 2017 states:  ...long walk to immigration, but long queues moved quickly with friendly staff. If you have an e-visa, get in the normal line for foreigners, but when you get to the end, go to the booths at the far left.  Near immigraiton are ATMs, then a duty-free shop next to the baggage counters.  Baggage x-ray at customs is quick. The train station is a bit of a walk.... Arrivals was 'painless', so was departure. ...a security check at the entrance (full check - taking out laptops)..a second check after passport control is very quick.  Airside area a bit crowded and dirty; but with plenty of conveniences & bars with runway views and prices on par with other airports (but 2-3 times the prices of central Instanbul).

Future Airport developments:  Around-the-clock construction has started on a new Airport located 35km from Istanbul, in the district of Arnavutkoy, along the coast line of the Black Sea, and - to become one of the world's largest airports - intended to replace the current Ataturk Airport. Upon scheduled opening at first quarter 2018, it is to accommodate 150M passengers annually, supported by six runways and glass-and-steel Passenger Terminal divided into three sections: the center section of which has one concourse, and the two outside sections each have two separate concourses, built in a V shape. A long Satellite Concourse (opposite of the main Terminal's center concourse, will spread out on both sides of its center.  The new Terminal is also shortlisted for the  prestigious architectural award. 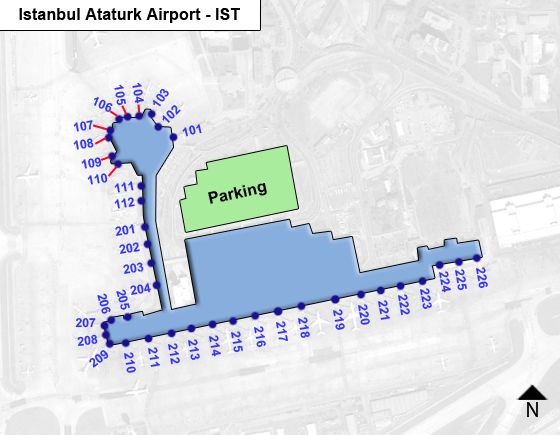