iFly.com
Madrid Barajas International Airport MAD (which recently added 'Adolpho Suarez' to its name) is Spain's primary airport, serving its cpital city of Madrid and surrounding areas. It handles the majority of the country’s transatlantic flights to the Americas, and is a hub to worldwide connections.  Barajas International is one of three Madrid Airports (the Cuatro Vientos Airport serves mainly as general aviation airport and the Torrejon Airport - sharing civil and defense parts - is primarily for executive and private aviation.

MAD Airport is located in the district of Barajas, 9 km northeast of the financial center of Madrid - situated directly in the center of Spain. Getting to the Airport is quick and easy, due to recent upgrades to road links to each of the four passenger terminals, and access from all terminals to the Madrid Metro.  Barajas Airport is accessible from major motorways A1 (exit 17) to M12, or from A2 (exit 12 to M14).  From Madrid's Ringroad M40, head onto A2 towards Barcelona, use exit 12 to the M14.

With four long runways and 50.4 million passengers in 2016, Madrid Barajas International is primary hub for Iberia and is served by a host of domestic and international, regular & low-fare airlines, offering direct and connecting flights to all points of the globe.

Madrid Barajas International Airport has four passenger terminals -T1, T2, T3 & T4. For Terminal details at this site open ‘Terminal Map’ and scroll down to the text;  for ground transportation open ‘Ground Transportation: /Buses & Trains. IMPORTANT NOTES:
- Barajas Airport  gets you within 16 minutes to city center via the Madrid Metro subway - take Metro Line 8 from either T4's level 1 or T2's  level 1 via connecting passageway in the center to carpark 2. The Metro also connects to stations of the Spanish railway network (Ceranias).
- Departing passengers heading to the United States: Put ALL your carry-on electronics in a ziplock bag - ready to be taken out - saving time & aggravation at redoing your security check!
- Early morning breakfast at T1: only one restaurant available with long queues!
- Wifi is free for 30 mins; and for next 30 mins only 1.5 Euro (but slow).
- Arriving passengers transfering to another flight and using bus to T1 (taking 7 minutes) - note :  A kind traveler gave this tip:
Do not follow the crowd heading forward (leading to passport control) - instead use, at the far right corner, the small escalator & stairs. Once on level 2, most flights are to the right (arranged alphabetically - UK flights use mostly A/B).  Proceed straight on to the small security check area. After passing & taking up some stairs, you find a Starbucks to the right; walking further you see the  Lavazza Coffee bar with the only closeby bathroom to the right. (there is also a charging station, but it's not free!). If departing from either B or C gates you can spend time 'milling around' - however, keep in mind that A gates require quite a hike - depending on your speed, it may take from 11- 20 minutes and gate numbers are only  posted 20-30 mins before boarding! 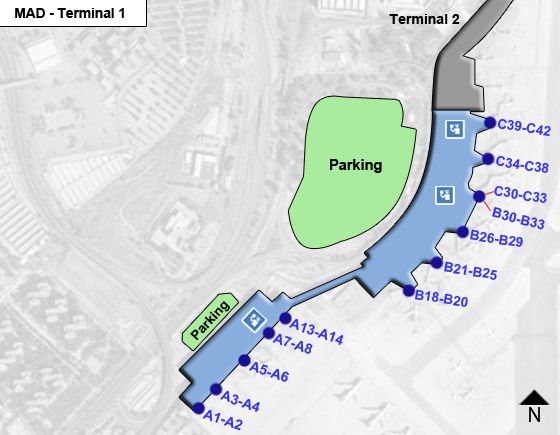 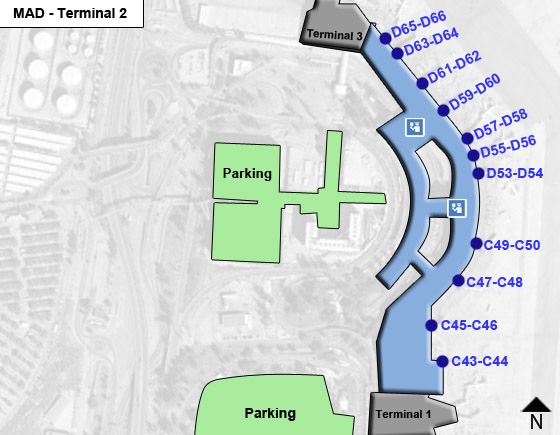 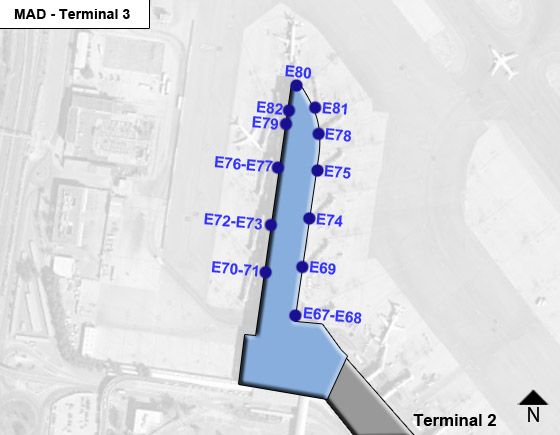