50 °F / 10 °C 10:49 AM
iFly.com
Moscow Domodedovo International Airport DME is the largest & fastest-growing airport in Russia, and one of two major airports serving the greater area of the capital city Moscow (the other is Sheremeyevo SVO). It is operated by the East Line Group on a long-term lease, while the runways are controlled by the State. Domodedovo in 2013 was rated by Skytrax for the fourth time as being one of Eastern Europe's best airports, and considered it in 2014 'Best in Russia & the CIS'. DME is now Russia's largest air hub.

DME Airport is located in the Domodedovsky District, Moscow Oblast - 42 km southeast of the city center of Russia’s capital city Moscow.  Both a speedway and the railway connect Domodedovo Airport to the City.

With 28.5 million passenger in 2016, and three long runways, Domodedovo International Airport is hub to Transaero, S7, VIM & Globus airlines, and the base airport for members of the Star Alliance and Oneworld. It is the only Russian Airport certified to accept the Airbus A380, and its domestic, CIS-country affiliated, and foreign airlines offer countless destinations with direct and connecting flights to all points of the globe.

The on-Airport Domodedovo Airhotel (tel. +7 495 795 3868) with 294 rooms and extended services, offers minibus shuttle to the terminal and a guarded parking lot at discount rates.

Domodedovo Airport has currently one  passenger terminal - T1 with Concourses A & B.   For Terminal details at this site open ‘Terminal Map’ and scroll down to the text;  for ground transportation open ‘Ground Transportation: /Buses & Trains.

Future Airport Developments:  While the first segment has been completed - ongoing Segment 2 work on the new 235,000 sq.meter Terminal 2 (T2) - to be added to T1's left wing is scheduled to open in 2018 (at the start of FIFA World Cub).  Upon completion, it is expected that expenditures for T2 will have reached 27 billion rubles, while capacity for both T1 & T2 will have reached an area of nearly 500,000 sq.meters, with over 45 million passengers annually.  All arriving passengers will be serviced in a single area (the 'under-the-roof concept).
A new multi-level carpark is  to be built near T2.
Furthermore, plans are to develop a multi-modal traffic center for  transfer of passengers and cargo - integrating flight flows between Eurasian and Asian-Pacific regions.
Address
Domodedovsky District
Moscow Oblast, 142015
RUS
Website: http://www.domodedovo.ru/en
Contact: http://www.domodedovo.ru/en/passengers/help/
Phone: +7 495 933 6666 / 8-80 200 3366 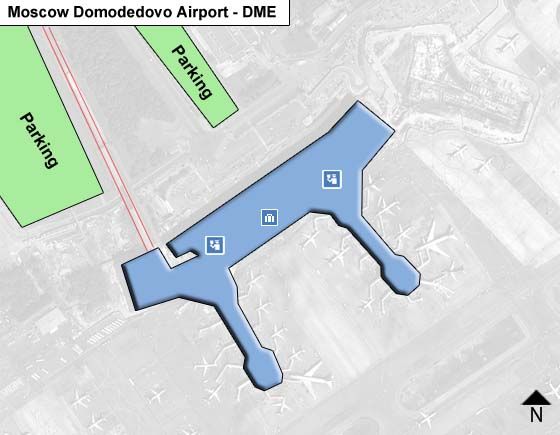 Have a question about Moscow Domodedovo Airport?