iFly.com
St. Thomas Cyril E. King  Airport STT is one of the busiest airport in the eastern Caribbean, open 24/7. It serves as a major inter-connecting point to the United States Virgin Islands and also offers an alternate route to the British Virgin Islands.

King Airport is located on the southwestern side of the Island of St. Thomas, part of the US Virgin Islands, and is just 4 miles east from the City of Charlotte Amalie.  Charlotte Amalie is a pleasant city with a major cruise ship port offering abundant shopping opportunities.  The Airport is open 24/7, but the terminal is only open 6am-11pm.

With one runway an estimated 530,000 passengers annually, Cyril E. King Airport isserved by a number of major US airlines and by small local airlines connecting to other Caribbean islands. Next door to the right is a seaplane port for the adventurous traveler, offering connections to other islands.

The 2-level passenger terminal at St. Thomas Airport has two levels and 11 airline gates.  Due to its small size, assistance with luggage is generally not needed, as you walk only the few steps to the ticket counters inside, as well as to the adjoining departure areas for the ferries.
King Airport can easily be reached by taxi, bus or rental car. Taxi vans are plentiful at affordable set rates.

NOTICE:  While the Airport may do without a Customs Declaration form (officers will ask passenges questions as to whether they have something to declare, or if they carry fruit, etc. -  passengers departing on American Airline flights now need to arrive three hours prior to scheduled departure.have their baggage checked in 90 minutes prior to departure. 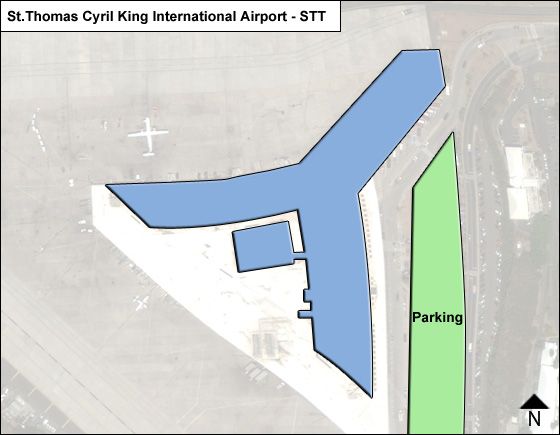