T.F. Green International Airport has two concourses, North and South. The South Concourse has eight gates and the North Concourse has 14. Gates seven and eight are designed for international arrivals and are directly connected to customs, which is on the lower level of the concourse.

View the full list of airlines served at PVD here.

Located directly adjacent to the Terminal, Garage A is easily accessible from both departures and arrivals by the covered walkway at PVD Airport.

Garage B at TF Green Airport offers covered parking and is just a short walk to the Terminal.

There are many ways passengers can get from T.F. Green Airport. From rental cars to public transport to taxi, plus more, travelers can choose among a variety of options available after arriving at the airport.

Passengers can easily travel through rental cars from PVD Airport. Avis, Alamo, Hertz, etc. are some of the renowned providers for rental cars.

Taxis are located in Lot D which is directly in front of the airport terminal building.

The Rhode Island Public Transit Authority (RIPTA) offers public bus transportation to and from the cities of Providence (Kennedy Plaza in downtown Providence) and Newport.

To make your stay amazing, the airport provides visitors with many different amenities and services including: 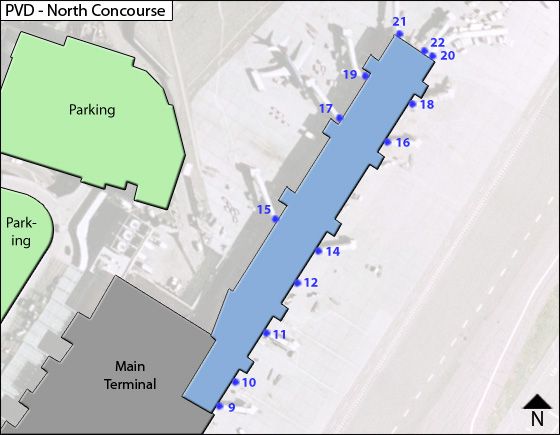 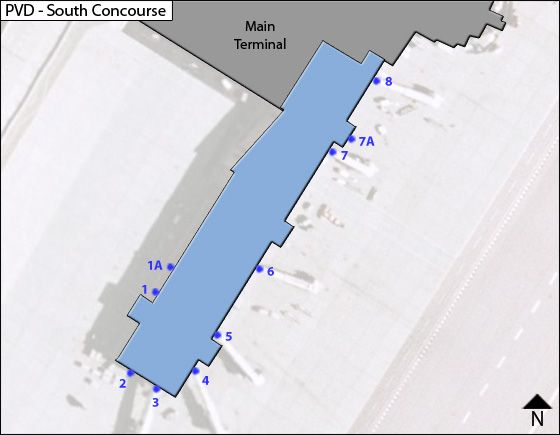 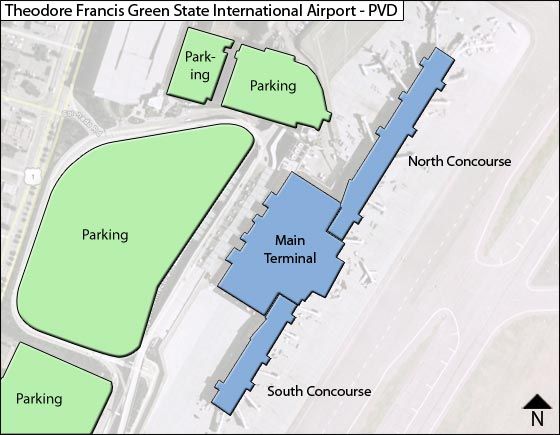 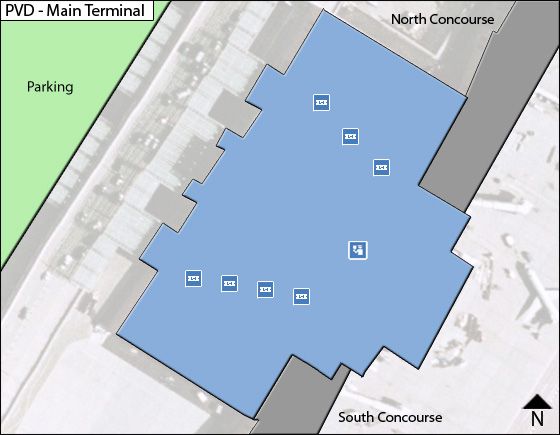 What is the number for American Airlines customer service baggage claim?

Where to check in for Southwest departure flights?

The Southwest Airlines check-in is located on Level 2 near the security checkpoint.

How much does it cost for the handicapped to park in the Garage A Levels 1 and Level 3?

I have a 15 year old flying in to see a friend who moved away. Can his friend and their parents get an escort pass to meet him at his gate? If so, what is the procedure.

We would recommend making arrangements with your airline directly prior to their arrival.

What terminal does skywest united use?

We didn't find this airline listed at this airport.

Where to pick up arriving passengers from American Airlines?

The best option would be to wait in the cell phone parking lot D which is located at 2282 Post Road, Warwick. This puts you within a short distance to the arrival gates and your passenger can let you know when they are there.

How late do the taxis run?

Where is Breeze Airline located in the terminal?

The check-in for Breeze Airways is located in the center of Level 2 in the terminal.

We have a flight to Florida leaving at 6:00 am from this airport what time should we arrive to check in?

It is recommended to be at the airport 90 minutes to 2 hours before the scheduled flight time.

You will need to contact your airlines directly with any baggage claim questions.

Where are the airport lounges?

There is an Escape Lounge that is located just past Gate 18. There is also a Military Lounge located on the second floor.

We live in Narragansett. Is there a shuttle from our home to Green airport? If not, please advise best way to get to the airport.

Yes, there is a shuttle that you can book. Here is more information.

I am flying tomorrow afternoon with an older individual who will need wheelchair assistance from entrance to gate. Can we just let the skycap know when we arrive there?

You should notify your airline through an airline representative at the airport. If you need assistance from the curb, parking area, or Rental Car return area, to get into the terminal, please call 401-737-3300.

I will need help with my luggage - what do I do?

An airline agent at the baggage service office should be able to assist you.  If the office is closed, check the airline's check-in counter on the departures level.

We could not that confirm that curbside check-in is currently offered for Southwest at this airport.

What does it cost to get a baggage cart?

Baggage carts typically cost around $4 or $5 but prices can vary. Click here for more information around baggage services.

Where is Dunkin Donuts?

There are three Dunkin locations. First, at the North Concourse just past Gate 14. Next, at the South Concourse at Gate 6. Finally, in the baggage claim area on the arrivals, or lower, level.

Is there a Cell Phone Waiting Lot?

What are the security hours?

The airport's TSA screening hours are from 4:15am until the last scheduled domestic departure flight. The TSA can modify these hours based on flight delays or airline schedules.

What time do I need to get to the airport for a united flight going to Aruba departing at 5:45 am?

According to the airport, 1/5 to 2 hours prior to departure is suggested. These times may vary based on volume and security wait times.

Have a question about Providence Green Airport?

The airport terminal building is open 24 hours. For ticket counter hours, please check with the individual airline or rental car agency.
An airline agent in the baggage service office for the individual carrier can assist you. If the office is closed, the airport information desk may provide assistance.
Other than service dogs, animals that are traveling with passengers must be in crates. No other animals are allowed within the airport building. There is an animal relief area directly outside the front doors of the airport.