O'Hare International Airport's semi-circle terminal complex consists of four passenger terminals: Terminal 1, Terminal 2, Terminal 3, and International Terminal 5. As depicted in the ORD airport maps, all terminals offer on their lower level roadway access to ground transportation from the curb front (Airport Express, rental cars, taxis, charter buses, suburban & reserved taxis, reserved limos). The Pedestrian Tunnel Level connects with the other terminals, as well as with the Main Parking Garage in the center, with the Bus/Shuttle Center at Level 1 and the Hilton Hotel in front of it. The Airport Transit Station (ATS) connects to the Airport Transit system, above the upper-level roadway. 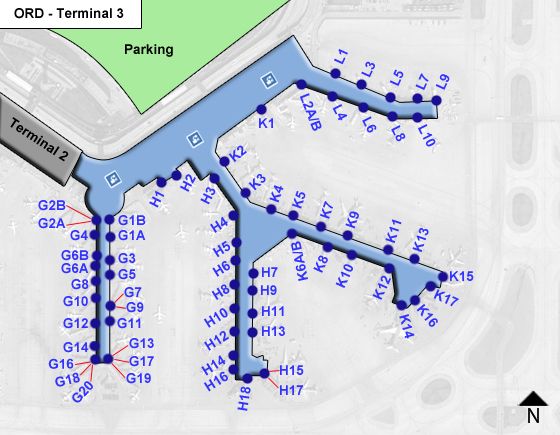 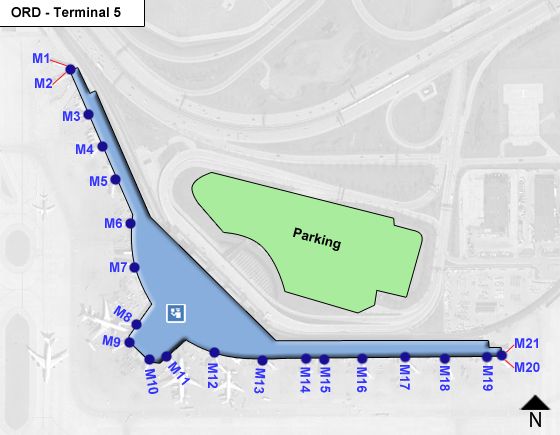 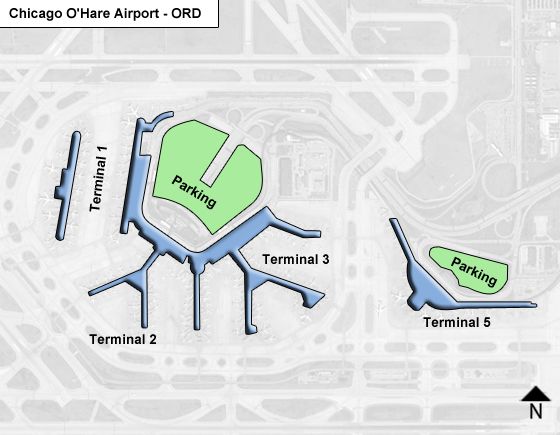 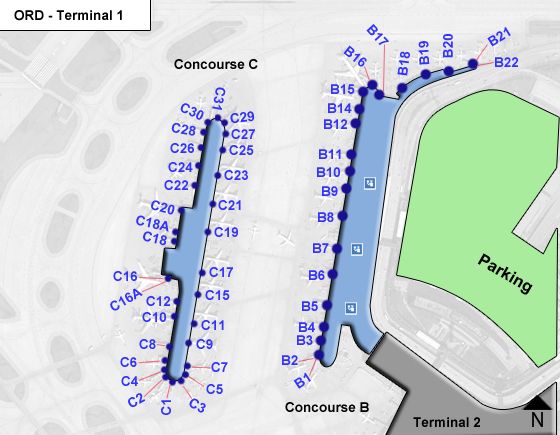 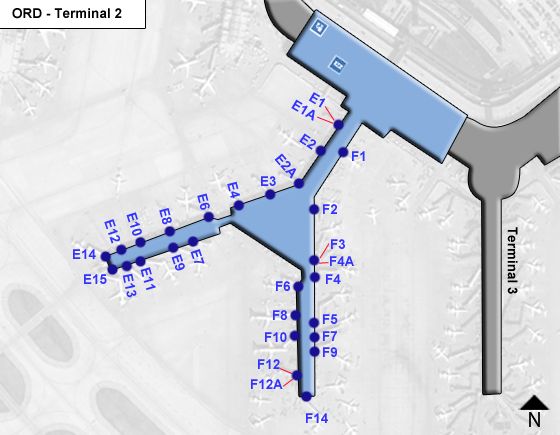 Terminal 1 at Chicago O’Hare Airport is served by All Nippon. Lufthansa and United Airlines caters to departures as well.

For meeting the banking needs of the passengers, there are foreign exchange services available at gates C18 and B9​. There are several ATMs located inside the terminal as well.

Mother rooms can be found inside Concourse B at gate B10.

For meeting the banking needs of the passengers, there is Seaway Baking and foreign exchange services available inside the main hall. There are several ATMs located inside the terminal as well.

Mother rooms can be found inside Concourse F at the crossover between gates E5 and F9.

To get better oriented, see the ORD Map - Terminal 2.

For meeting the banking needs of the passengers, there are foreign exchange services available at gate K11. There are several ATMs located inside the terminal as well.

Mother rooms can be found at the rotunda, next to the Yoga Room and Urban Garden as well as inside Concourse L at gate L6. This terminal also has a Service Animal Relief Area (SARA) at the rotunda near gate K1.

To get better oriented, see the Chicago O'hare Map - Terminal 3.

For meeting the banking needs of the passengers, there is Seaway Baking on the lower level and foreign exchange services available on both levels. There are several ATMs located inside the terminal as well.

Mother rooms can be found inside Concourse M at gate M14​​​​​

To get better oriented, see the ORD Airport Map - Terminal 5.

There are many options for shopping and dining around the ORD airport. Some notable shops and restaurants include Brookstone, America’s Dog and Berghoff Cafe in Terminal 1; Duty Free Store, Argo Tea, and Chili’s Too in Terminal 2; Brighton, Bubbles Wine Bar, and Gold Coast Dogs in Terminal 3; and Dufry, Big Bowl, and Burger King in International Terminal 5.

To reduce wait times at the airport, passengers are provided with Automated Passport Control or Global Entry services allowing them to skip the long queues. With the option of Mobile Passport Control passengers can have customs clearance via a mobile app.

The hours and wait times estimates for each security checkpoint can be found on the Chicago O’Hare Airport Security Wait Times Page.

For international passengers, there is a separate terminal, International Terminal 5, the details for which are mentioned above.

Have a question about Chicago OHare Airport?