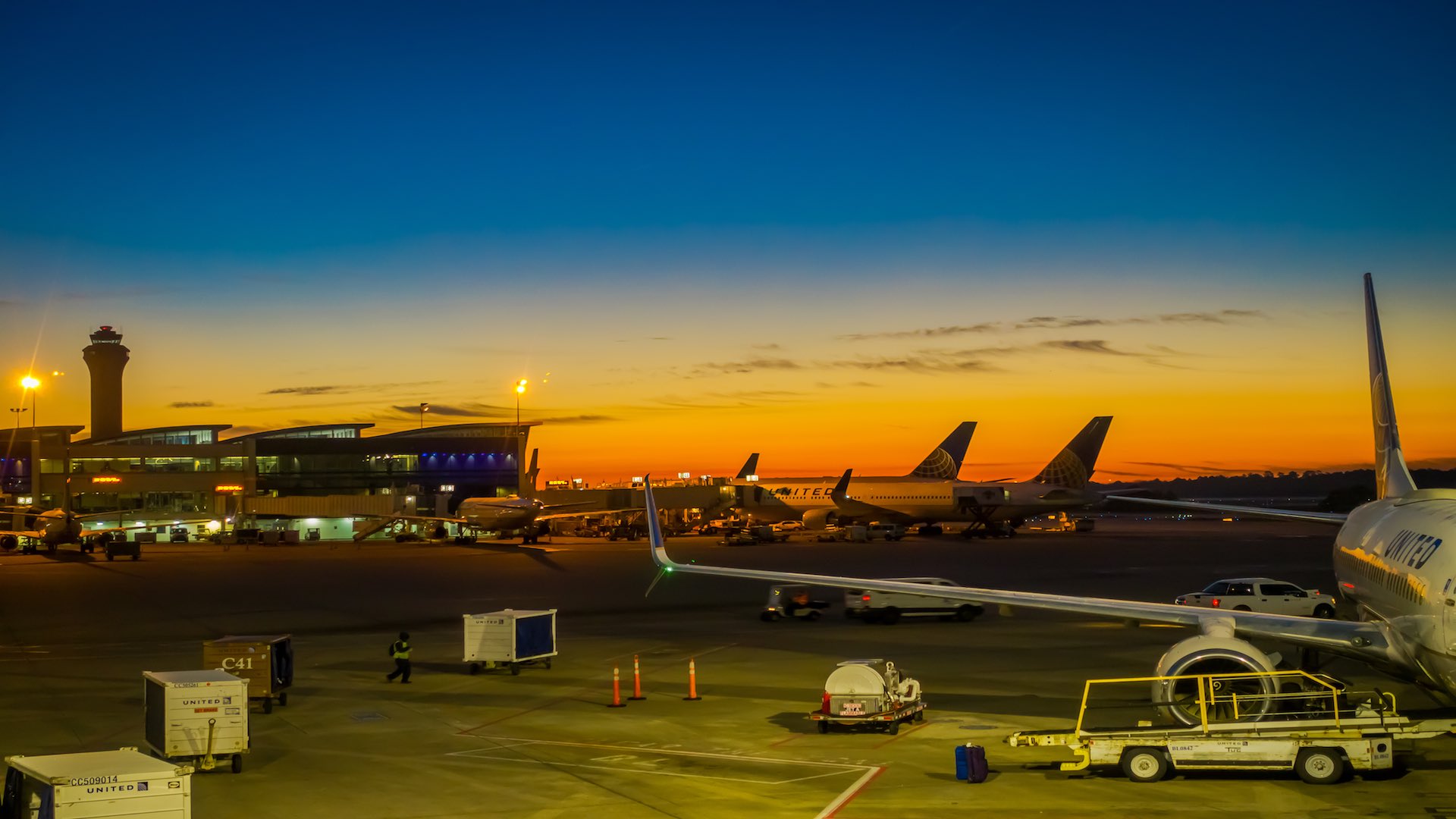 Located in Houston, Texas, United States, George Bush Airport is an international airport serving the Greater Houston Metropolitan area. It is also known by its IATA airport code IAH. The original name of the airport was Houston Intercontinental Airport and was later renamed George Bush Intercontinental Airport, after George H. W. Bush, the 41st President of the US. IAH covers an area of 10,000 acres and is located about 23 miles (37 km) north of Downtown Houston.

More detailed information about the airport can be found below. 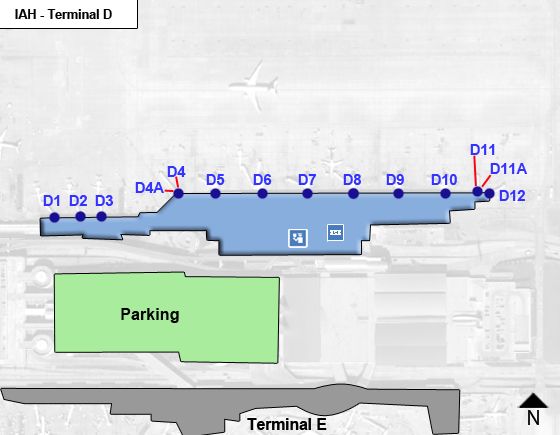 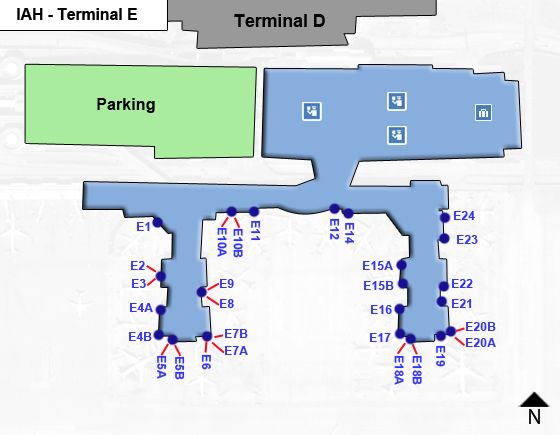 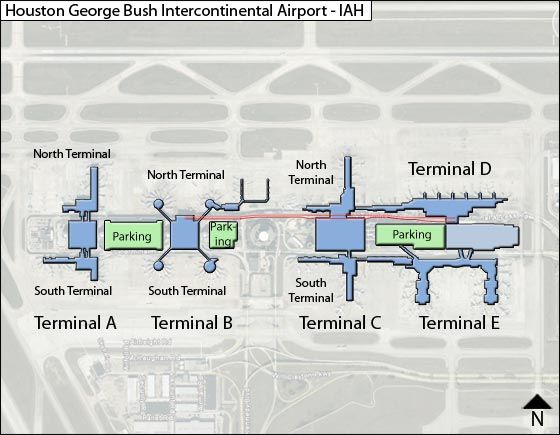 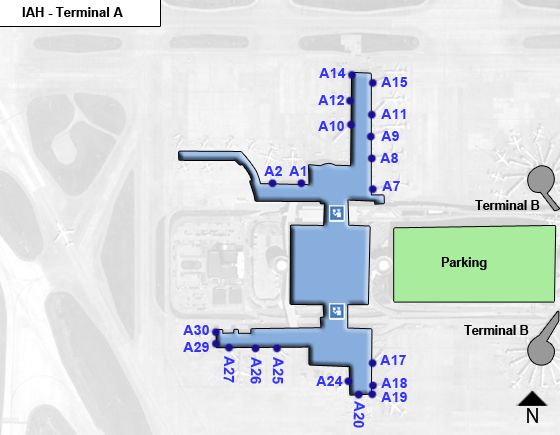 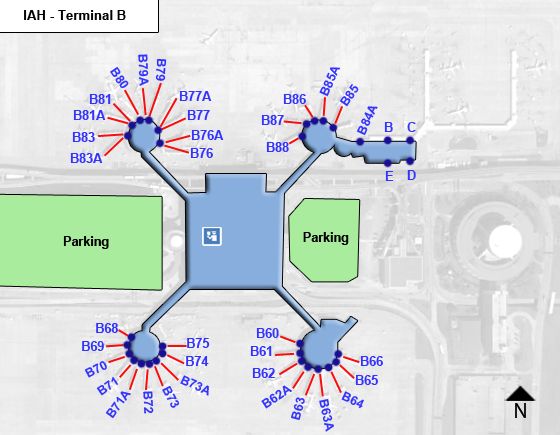 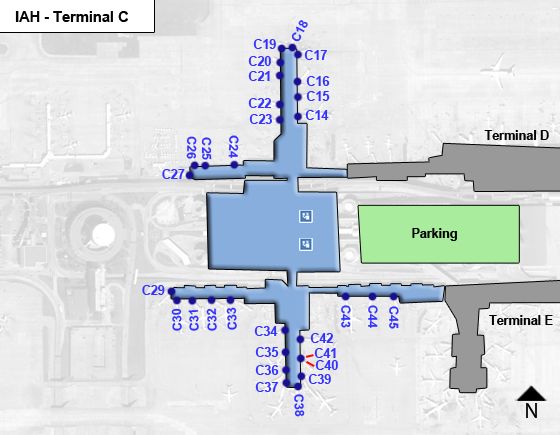 There are five terminals - A, B, C, D, and E at IAH Airport. Refer to the IAH Airport Terminal map, to see the terminal locations and for additional information.

Terminal A was one of the two original terminals to open in 1969. It has 20 gates.

Terminal B was the other original terminal opened in 1969. The gate areas of this terminal were demolished and rebuilt.

Terminal C, also known as Lewis W. Cutrer Terminal, was the third terminal to be built at the airport. It has 31 gates.

Terminal D is also known as Mickey Leland Terminal. It has several international lounges and 12 gates.

Terminal E is Bush Airport’s newest terminal and was opened in two phases.

Parking at IAH Airport is easily available at the terminals. There are several parking options at George Bush Intercontinental including hourly, daily, or long-term parking.

The passengers have many options for ground transport for their next destination after they’ve arrived at the airport. From airport shuttles to car rentals to buses, various transportation modes are available. Additionally, many passengers also opt for ride services like Uber, taxis, and Lyft.

Airport Shuttles are a great way to travel from IAH Airport. You can get a ride to almost any nearby location as there is an availability of various shuttle services.

Car Rentals are a breeze at IAH with multiple car rental agencies onsite at the airport. Travelers can choose from a large variety of vehicles among the various well-known car rental providers like Hertz, National, Enterprise, and more.

Public Transportation is available to all major areas nearby. METRO Bus 102 makes pickups every half hour at the south side of Terminal C (outside of baggage claim).

To help you enjoy your stay, George Bush Airport provides visitors with many different amenities and services including:

Is it possible to book assistance for an elderly /nervous passenger transiting in Houston?

Yes, you can make these arrangements with your airline when booking your flight.

What is the cost of long-term parking near Terminal C?

The parking lot closest to Terminal E is at a rate of $26/day.

Are DV plates able to park for free?

We didn't find any free parking rates available at this airport for customers with DV plates.

Do disabled vets with DV tag park free at IAH? If so what parking lots?

We didn't find any free parking available for disabled vets at this airport.

What is the best way to get from Terminal D to E?

You can use either the above-ground automated people-mover (Skyway) or the underground train (Subway) that connects all of the Terminals at this airport.

Does a vehicle with DV plates park for free in terminal parking?

We didn't find anything in the Parking information that stated there was free parking with a DV plate.

I need to get information regarding my mishandled baggage. I want help.

You can contact your airlines directly for any questions on baggage.

Is the united club open in Terminal A?

No, at this time it is marked as temporarily closed.

Does IAH offer free parking for disabled veterans with a disabled license plate on their vehicle? thanks!

We didn't find a free parking option for disabled veterans at this airport.

Is terminal parking free for vehicles with handicapped plates?

No, the same rates apply to all vehicles.

What are the hours of operation of the American Airline Baggage office in Terminal A?

The American Airlines counter is open from 3 AM to 8 PM.

Where is the ATM in Terminal D?

The ATM in Terminal D at IAH is located just inside and across from Gate D6.  It is near the currency exchange and animal relief stations.

Where is the interterminal train?

The subway train makes stops at all terminals (A, B, C, D/E) and there are signs marked "subway" at each spot.

Where is the Air France Lounge?

The Air France Lounge is located in Terminal D, near Gate D12.

Where do I pick up a passenger that is arriving on a Delta flight into terminal A? They don't have any checked bags.

You can pick up passengers curbside outside the terminals, Baggage Claim/Arrivals Level. For Terminal A, this will be on the north side, Door A-113.

Where is Spirit Airlines?

Spirit uses Terminal A at this airport.

Check with your airline if they are currently offering Skycap services - many have been suspended due to COVID.

Southwest operates out of Terminal A at this airport.

What terminal does southwest fly out of?

Southwest Airlines flies out of Terminal 2.

Is TSA screening closed on terminal B?

At this time, TSA screening does not appear to be closed at Terminal B.

Hi can I buy luggage in the airport shops before security? Thank you so much.

Allen’s Landing, located before security, may sell luggage but we cannot guarantee that. We'd recommend purchasing luggage prior to arriving at the airport.

When should I get my covid test? What covid test are accepted?

COVID tests are not required for domestic travel. For international travel, it varies from country-to-country. Check the rules for where you are traveling to to see about timing and what tests are accepted.

Can I print at the airport?

There are not any printers for guests at this airport. However, the on-site hotel (Marriott) has a business center.

Have a question about Houston Intercontinental Airport?

Yes. While the official name is George Bush Airport, it is also known by its IATA code IAH, which was derived from the stylization of the airport’s name as Intercontinental Airport of Houston.
Houston Airport is a hub for United Airlines.
The airport is located about 23 miles (37 km) north of Downtown Houston.
Passengers are permitted to sleep in the airport. It remains open 24 hours a day and visitors can stay inside overnight. We also recommend these awesome IAH layover ideas.
Being one of the busiest airports in the US, you can fly to many cities from Houston Airport. Check out our direct flights page to see where you can fly from the airport.