iFly.com
Akron Canton Airport CAK is serving northeast Ohio. It was recently ranked as one of the fastest-growing airports in the country and the Airport has responded by embarking in 2008 on a 10-year expansion and improvement project, which includes the recent extension of the runway. Akron Airport is also offering one of the cheapest fares in the U.S.

CAK Airport is situated between the cities of Akron and Canton, is nearest  to Interstate 77, and can be reached indirectly from  I-271, I-277 & I-76.

With a newly extended runway and an estimated 1.4M passengers in 2016, Akron-Canton Airport is served by a number of major airlines offering direct flights to US hub cities, with connections around the globe.

Akron-Canton Airport has one passenger terminal.   For Terminal details at this site open ‘Terminal Map’ and scroll down to the text; for Parking details, open ‘Parking Map’, for ground transportation open ‘Ground Transportation: /Buses & Trains.

Future Airport Developments - CAK 2018:  Aside from current ongoing projects (outlined in the Terminal Map section),  these are the projects to be done up to 2018; however the plan is flexible and may change according to needs:
- a $30M gate replaement project is to b e completed by 218/19.
- Aircraft parking & general Aviation area expansion.
- Expansion of ticketing wing by 150 ft. and new counter with 3 ticket positions;
- Expansion of new upper-level concourse by 300 feet for 3 more gates, new busines club, 300 seats, glass atrium & more restrooms.
- Building new CAK International Business Park. 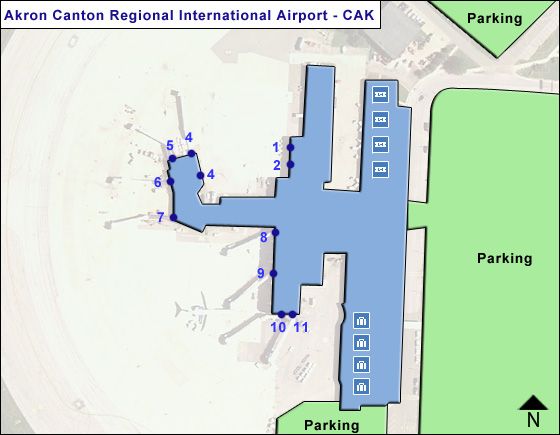