MOB Airport is owned and operated by Mobile Airport Authority. It covers an area of 1717 acres (695 ha).

View the full list of airlines served at MOB here.

Parking options at Mobile Regional Airport include Short-term, Long-term parking. In the future, the covered surface parking lot could be converted into a garage.

The hourly Parking lot is one of the most convenient parking options at MOB Airport. The first 30 minutes are free.

$9 is the daily maximum

Another comfortable option to park at Mobile Airport is the Long Term Parking. The first 30 minutes are free.

$7 is the daily maximum

This is also one convenient parking option.

$12 is the daily maximum

When it comes to getting to or from the airport, there are a variety of possibilities. Taxis, limos, public trains or buses, shared-ride vans, and the self-reliable option of driving and parking are all options. The various options include buses, car rentals, airport shuttles, etc. Many passengers also opt for ride services such as Uber, Lyft, and Taxis.

The rental car agencies maintain an office in the terminal or adjacent to the Mobile Airport MOB. Avis, Alamo, Hertz, are some of the well-known providers for rental cars.

Taxis at MOB Airport have to be booked. Some taxi companies are Allied, Yellow Cab, Annie’s Taxi.

Mobile Regional Bus has to be booked. Wave Transit, BRATS, ECAT, and Mobile Bay Transportation are some Shuttle and Bus services.

To help you have an amazing stay, Mobile Airport provides visitors with different amenities and services including: 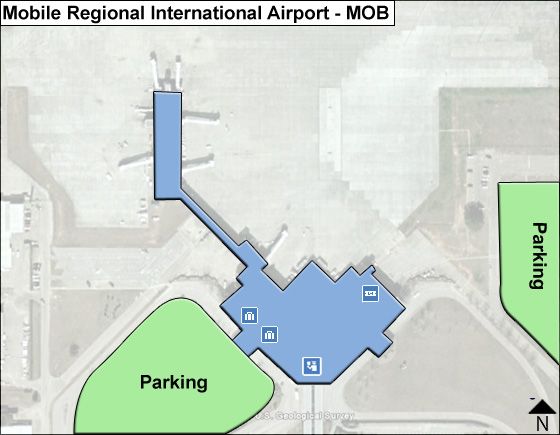 On average, MOB Airport has 4 flights departing each day.
Popular flight routes from Mobile Regional Airport (MOB) include Dallas, Houston, New York, Moline, Tampa, Charlotte, Los Angeles, Seattle, Norfolk. These are the most popular domestic flight routes.
The earliest flight is DL4710, which departs for Atlanta at 06:25. If you wish to take this flight, we recommend you stay at a hotel near the airport on the night before departure.