Sarasota-Bradenton International Airport is located within three jurisdictions: Sarasota County, the city limits of Sarasota, and Manatee County. It is owned by the Sarasota Manatee Airport Authority.

Sarasota-Bradenton Airport terminal building is a combination of efficiency, comfort, and aesthetics, with a distinct local flavor. It features very short walking distances, with a simple progression from the parking lot, to check-in counters, to security screening, and onto the concourse.

It is the main terminal at the airport and contains 13 gates numbered from B1 to B14 (B13 is skipped).

Terminal D is the airport's commuter terminal and contains 4 gates numbered from D1 to D4. It is directly attached to the main airport building with its entrance just to the east end of the ticketing area and has not been in active use since the mid-2000s.

View the full list of airlines served at SRQ here.

Short-term parking is available directly across the terminal building.

Long-term parking is located adjacent to the short-term lot with a free shuttle service to the front of the terminal beginning.

To access this lot, users can enter Airport Circle and turn right before reaching the terminal building.

Passengers have a variety of options for ground transport after arriving at the Sarasota Airport:

Rental cars may be obtained from on-site car rental companies that have rental counters conveniently located in the baggage claim wing. The cars are located in the rental car lot just a short walk across the street.

On-Demand Eco-friendly Sedans, Luxury Sedans, and SUV’s are available just outside the baggage claim area on the west end of the terminal. A uniformed starter will connect you with a luxury vehicle of your choice, provide you with a fixed rate based on your destination location, load your luggage, and get you on your way.

For visitors to have a great stay, SRQ provides plenty of amenities and services including: 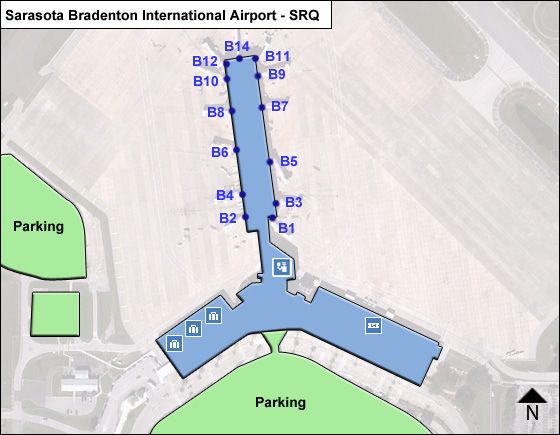 Yes. While the official name is Sarasota-Bradenton International Airport, it is also referred to by its IATA code SRQ The airport's IATA airport code, "SRQ", is used as a general nickname for the city of Sarasota and Sarasota area, as exemplified by media outlets like SRQ Magazine, WSRQ radio, and numerous local businesses in the area that includes SRQ in their names.
Yes. Just outside the terminal are two animal relief areas. One is located just east of the terminal near ticketing, and the other is located at the west end of the terminal near the taxis. Each area is conveniently equipped with a fire hydrant and waste disposal bags.
You can fly to many cities from SRQ Airport. Please have a look at our direct flights page to see where you can fly.