iFly.com
Surabaya Juanda International Airport SUB ('Bandar Udara Juanda Internasional') is the second-largest, as well as second-busiest airport in Indonesia, and can easily be identified  from the air by its a 15-story control tower.
SUB Airport is located on the large Island of Java, in the town of Sidoarjo, and near Surabaya, East Java.  It is operated by PT Angkasa Pura.
Surabaya Juanda Aiirport has been voted as being the 'World's most on-time airport' by U.K. passengers.

With an estimated yearly passenger count of  15.5 million, and a long runway, Juanda Surabaya International is served by domestic and international airlines offering direct and connecting flights throughout Indonesia and eastern Asia. The new apron can handle 18 aircraft at the same time and .

Surabaya Juanda Airport now has two passenger terminals - one for domestic flights, the other for mostly international flights.  For Terminal details at this site open ‘Terminal Map’ and scroll down to the text;  for ground transportation open: ‘Ground Transportation /Buses & Trains. Current & Future Airport Developments: By third quarter 2016 construction started on additional supporting infrastructure, while completion of the Airport expansion and its two added runways is scheduled for mid-2019 - when the Airport is to accommodate 70 million passengers annually.
The 'Ultimate Terminal' concept is to offer at its basement level a shopping concourse and a recreational area.
(6,000 hectares of land had been prepared, of which 1,500 hectars are set aside for the two runways and for Terminal 3. The remaining 4,500 hectares are intended for construction of the Airport City and  the 'Ultimate Terminal' building.) 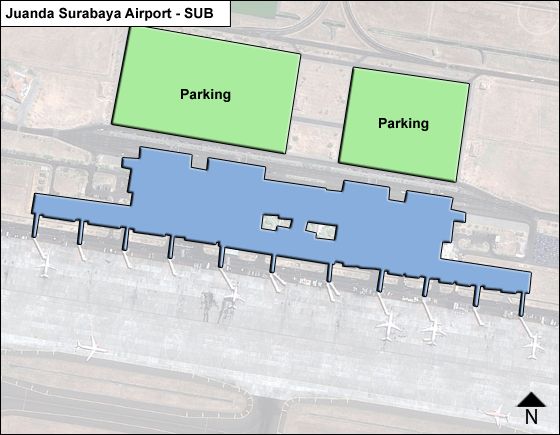