Denver Airport has one main passenger terminal - the Jeppesen Terminal - with three separate large Concourses A, B & C. This is the main entry point to all DEN terminals, and houses counters & kiosks for airline check-in, baggage claim, and all TSA security processing. The 1.5 million square feet main terminal can be recognized by its white-peaked roof, reflecting the Rocky Mountains close by. More info can be found below 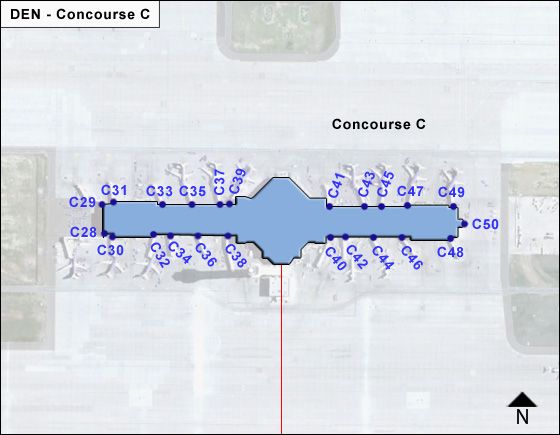 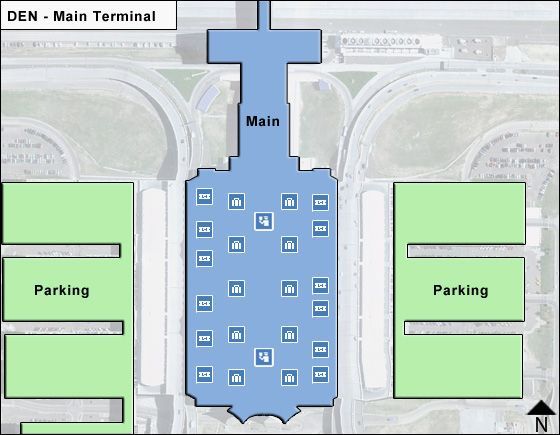 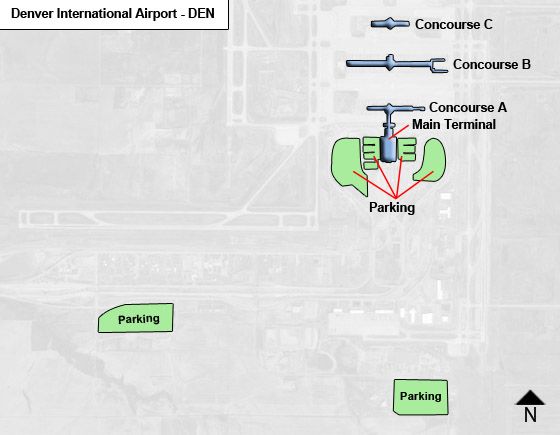 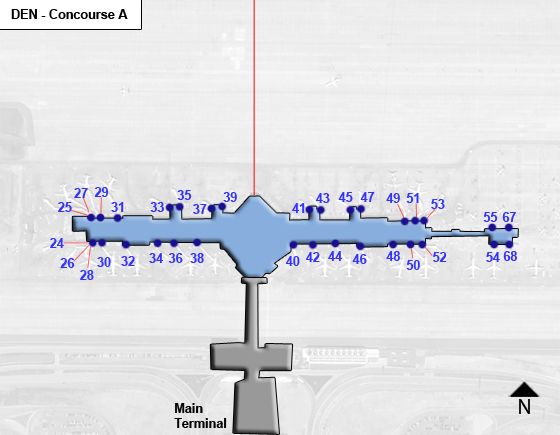 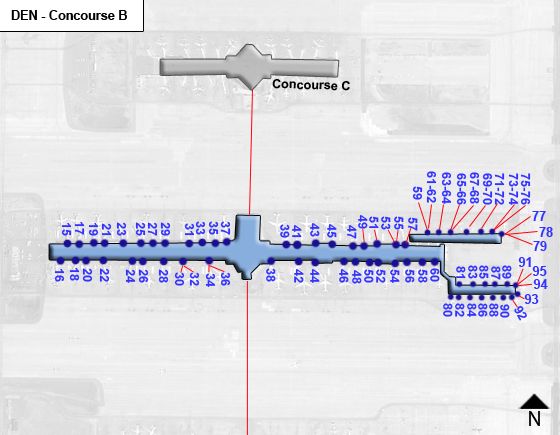 The underground AGTS train runs continuously between the Main Terminal and its Concourses, arriving at their center, with gates on either side - and taking 5 minutes for each stop. You can peruse the Denver airport map for getting a better idea of how all the terminals are arranged.

The open-air public Plaza connected to the Jeppesen Terminal includes new concessions and commercial space and is intended to be a venue for staged events, to be enjoyed by the Denver community and passengers alike. Aside from entertainment, guests may dine 'al fresco' with a view of mountains & departing planes.

Rental car and ground transportation counters are in the Atrium between security screening areas. Garages & parking lots are situated on either side of the terminal complex, and both West & East Terminals connect to their respective East & West Garages at their entry/exit doors.

Both East & West sides of Level 6 house food & drink & retail concessions. Level 6 also has curbside baggage check-in, security check, and pedestrian bridge to Concourse A. The area outside is intended for passenger pickup.

Serving gates A26-A68 serves mostly international flights. (Concourse A is accessible by train from Jeppesen Terminal or by Skybridge over the taxiway). It houses west gates A26-A39 and east gates A40-A68 - with the train station in the center (gates 33-47 lead to US Customs & Immigration). The Center is surrounded by food & drink and retail concessions.

NOTE: Duty-free store at A gates is for international passengers only.

Serving gates B11-B95 serves United Airlines. Accessible only by train from Jeppesen Terminal, the B gates are served by commuter flights. Concourse B has west gates B11-B37 and east gates B38-B60 on either side of the center (the duty-free kiosk is near B39) with access from gate B60 to gates B80-B95, and gates B57-B79 on another level.

Passengers arriving at DEN airport from international points (with the exception of those who cleared U.S. Customs at a participating airport) will arrive at Concourse A, walk through a passageway & over an enclosed bridge, then take the escalator /elevator to U.S. Customs & Border Protection (CBP) in the Jeppeson Terminal's North end, at level 5, where they go through passport control, pick up their bags and go through Customs clearance, and - if connecting to another flight, re-check-in bags outside of Customs area (airline personnel will direct you to your departure gate; free baggage carts are in the Customs area). Thereafter, proceed to passenger security screening in the Jeppesen Terminal, then take the ATS automated train from the terminal to your departure gate. International passengers entering the U.S. have access to the Mobile Passport Control (MPC).

Eligible passengers include all U.S. and Canadian passport holders, U.S.Lawful Permanent Residents (LPR) and returning international passengers with an Electronic System for Travel Authorization (ESTA) from countries not requiring U.S. entry visas, including Australia, Japan, Germany and the United Kingdom.

US & Canadian citizens may use Denver's MPC app (Mobile Passport Control) - enabling them to submit, prior to airport arrival, passport info & customs form, which then converts into a scannable QR (quick response) code at their device.Separate and parallel-running Concourses A, B & C have each three levels: level 3 is the mezzanine; level 2 is the gate area; and level B the train station. Consult the individual Denver airport terminal maps for more details. All concourses are connected to the Main Terminal by train, while a pedestrian bridge connects the Main Terminal with Concourse A. All Concourses offer food, drink & retail concessions. Pet Relief Areas are in the centers of all three concourses.

Have a question about Denver Airport?