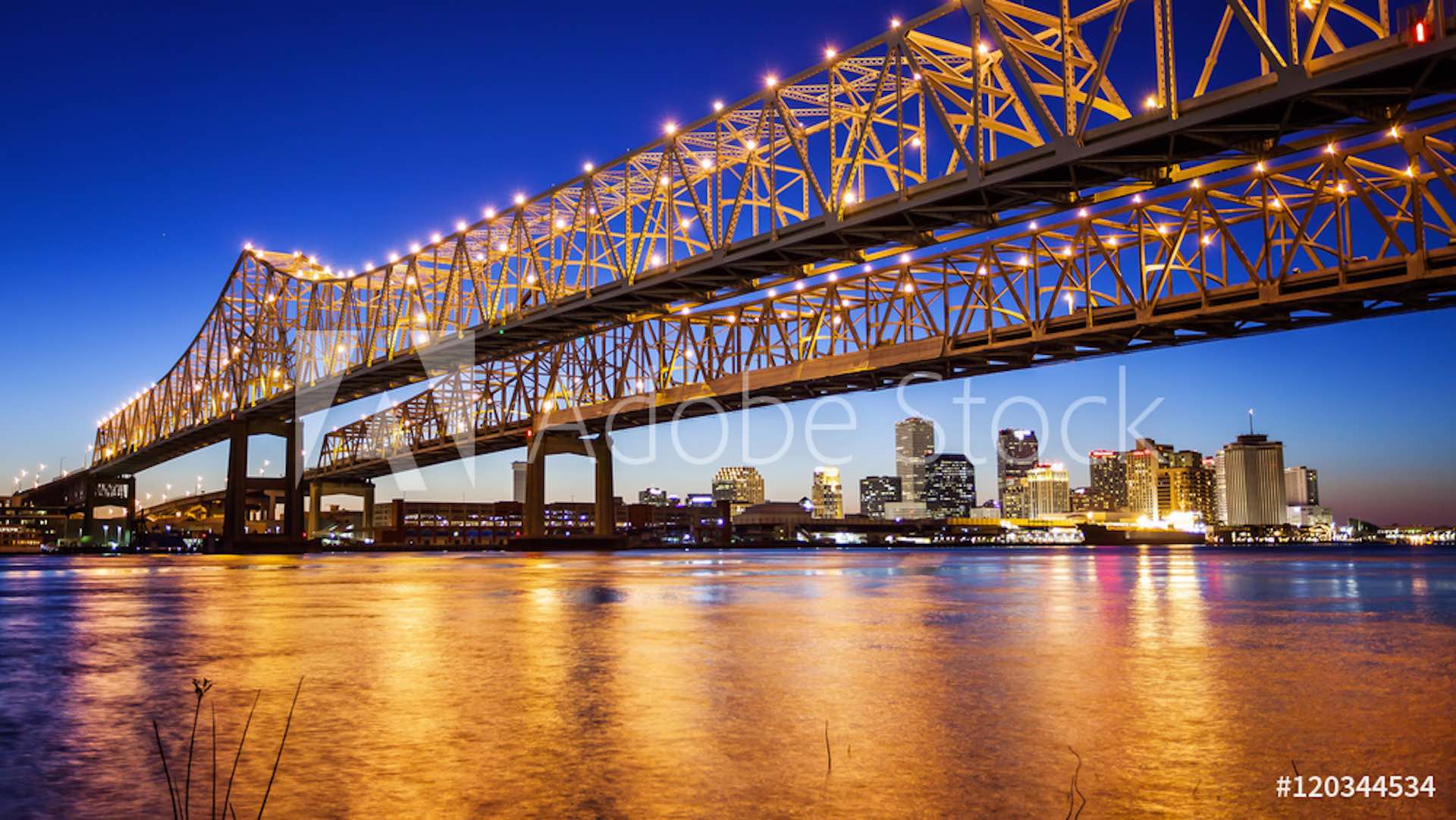 Louis Armstrong New Orleans Airport is an international airport under Class B airspace in Kenner, Jefferson Parish, Louisiana, United States. It is owned by the City of New Orleans.

Currently, the airport has one terminal on the north side of the airfield, and it was opened in November 2019. It has 3 levels (1,2, and 3) and 3 concourses (A, B, and C) with 35 gates. For additional information, and to see the terminal location, please refer to the New Orleans Airport Map.

This level is used for Arrivals and Baggage Claim.

Departures and Ticketing area are on Level 3.

View the full list of airlines served at MSY Airport.

Parking at MSY Airport is available at the terminal. From hourly to daily to long-term parking, there are various parking options at New Orleans Airport.

After arriving at the airport, passengers have several options for ground transportation to their next destination. You can choose among the various options including buses, car rentals, airport shuttles, etc. Also, many passengers utilize ride services like Uber, Lyft, and Taxis.

Airport Shuttle Services are a great way to travel from Louis Armstrong Airport. You can get a ride to almost any nearby location with the availability of various shuttle services.

Car Rentals are fairly convenient. There are many car rental agencies onsite at the airport. Some of the well-known car rental providers like Hertz, Enterprise, National, and many more, offer the passengers a large variety of vehicles to choose from.

Public Transportation is also easily available from the airport to all major nearby areas. Bus service between the airport and downtown New Orleans is provided by New Orleans Regional Transit Authority Airport Express Route 202 and Jefferson Transit bus E-2.

To help you have a wonderful stay, Louis Armstrong Airport provides visitors with many different amenities and services including: 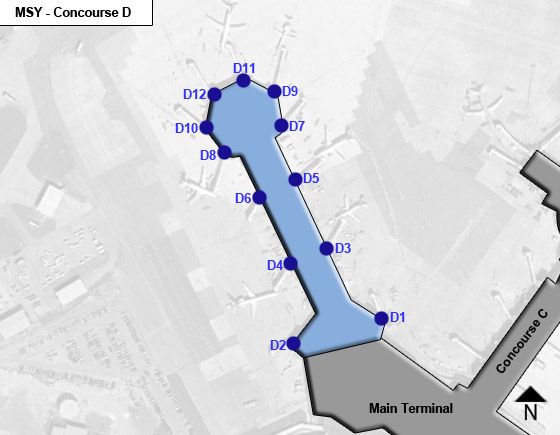 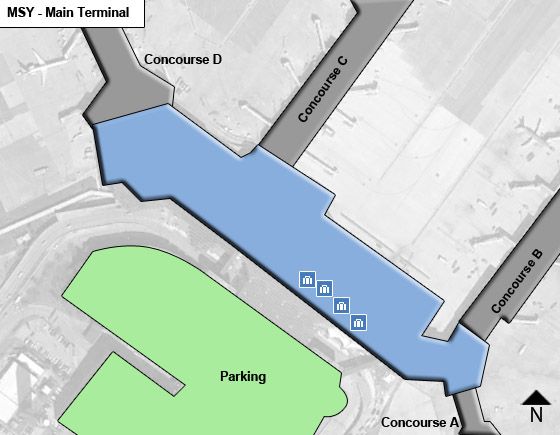 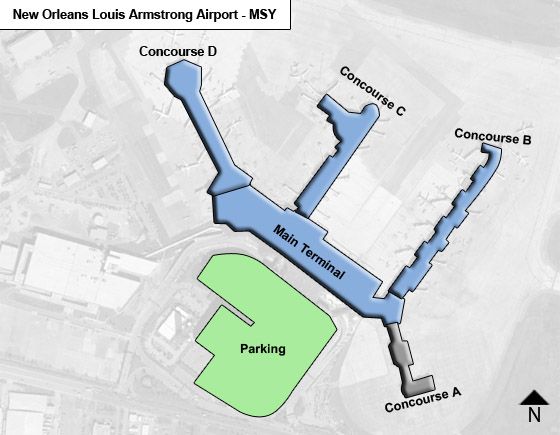 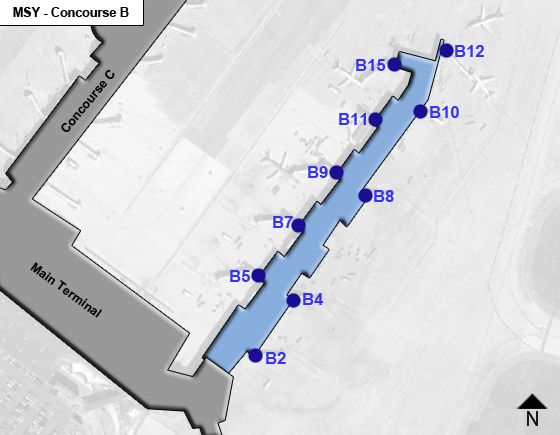 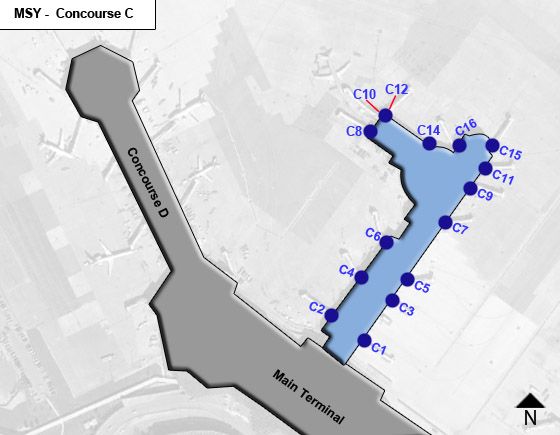 Are there seats to sit in at the Southwest Airlines luggage pick up?

Yes, there are benches located in baggage claim and throughout the airport.

Terminal data is out of date. MSY no longer uses the terminal shown on this site for flights.https://en.wikipedia.org/wiki/Louis_Armstrong_New_Orleans_International_Airport#Former_terminal

That is a Wikipedia page. Here's an updated Terminal Map.

What is the street address of the airport?

Where is the Breeze Airlines check in counter located?

What time does Delta start working?

Checking to see if an Driver's License was turned in.

Where is baggage claim?

Baggage claim is located on level 1 of the terminal.

Is there a cell phone lot?

If I’m flying in on AA and my friend is on Delta….where can we meet so that we can share a cab to our hotel?

Does this airport have a Sunday Catholic mass?

This airport does not have a Sunday Catholic mass ceremony.

Have a question about New Orleans Louis Armstrong Airport?

Yes. The official name is Louis Armstrong New Orleans International Airport and it is also known by its IATA code MSY. MSY was derived from Moisant Stock Yards.
The airport is 11 miles (18 km) west of downtown New Orleans.
The passengers are permitted to sleep in the airport as it is opened 24 hours. Also, travelers can stay inside overnight. We also recommend these amazing MSY layover ideas.
From Louis Armstrong New Orleans Airport, you can fly to many cities. To see where you can fly, please have a look at our direct flights page.