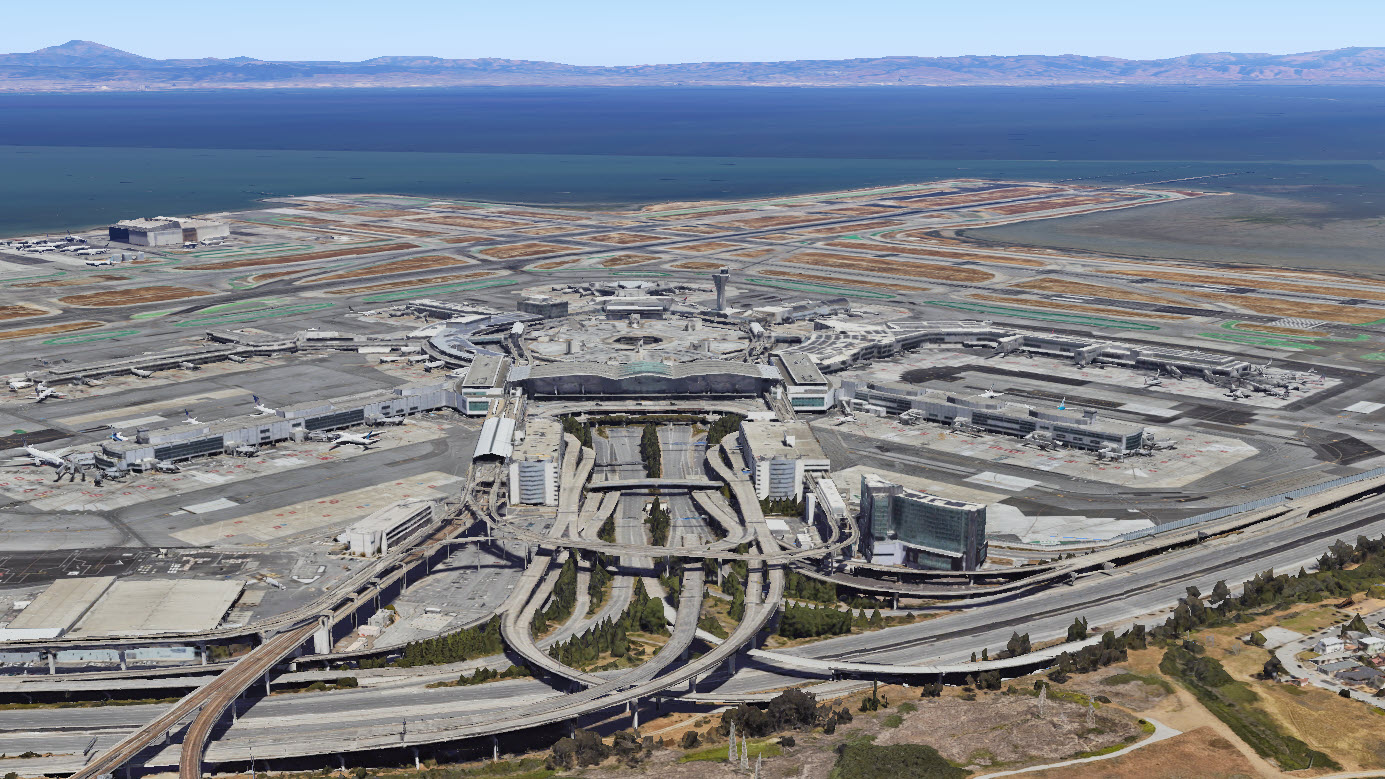 San Francisco Airport, often referred to by its IATA airport code SFO, is an international airport near San Bruno and Millbrae in unincorporated San Mateo County.

The airport is owned and operated by the City and County of San Francisco. It is 13 miles (21 km) south of downtown San Francisco, California, and serves Northern California's greater San Francisco Bay Area and is the largest of the three area airports.

The Airport has 4 terminals - 1, 2, 3, and International and 7 concourses (Boarding Areas A-G) with a total of 115 gates arranged alphabetically in a counterclockwise ring. To see the terminal locations and for additional information please refer to the San Francisco airport map.

It was formerly known as the “South Terminal.” This terminal is composed of:

It was formerly known as the “Central Terminal.” This terminal has only 1 concourse:

It was formerly known as the “North Terminal.” This terminal is composed of:

The International Terminal is composed of 2 Boarding Areas:

Parking at SFO Airport is available at the terminals. From hourly and daily to long-term parking, there are several options at the Airport.

Airport Shuttle Services are a great way to travel from San Francisco Airport. With the availability of various shuttle services, you can get a ride to almost any nearby location.

To help you enjoy your stay, San Francisco Airport provides visitors with many different amenities and services including:

Is there curbside bag check available on United?

We didn't find a curbside check-in for United Airlines at this airport.

Where can I get money?

There are several ATMs located throughout the airport.

I'm at international terminal departures level 01 and I need to find where frontier airlines is located. I have flight f9 664 at 8:36pm

Where are the rental cars located?

What are the TSA hours at Terminal 3? I have a 5am departure. Thanks!

Is there a currency exchange at the airport?

We couldn't find a currency exchange located at this airport.

The closest pet relief area in Terminal 2 is located near the C gates.

What terminal does Hawaiian Airlines use?

Hawaiian Airlines is located in Terminal A.

Where is Concourse G?

We did not find a Concourse G, but there was a Terminal G that is part of the International Terminal and can be reached by coming in through Airport Access Road and turning left.

What terminal is Air France located?

Air France uses Terminal IN - International at this airport.

Where is the lot to wait for flights to arrive?

The address for the Cell Phone Lot is: San Bruno Ave, N McDonnell Rd, San Francisco, CA 94128. We suggest putting that into your GPS.

Can I store bags while on layover in San Francisico?

Yes, storage facilities are located pre-security in the International Terminal Main Hall. They are open daily from 6am to 11pm.

Are there automated currency exchange machines that sell Vietnamese Dong in the International Terminal at SFO?

No, no currency exchange is offered at this airport at this time.

Where is American Airlines baggage claim?

American Airlines operates out of Terminal 1 at this airport. Terminal 1's baggage claim is located on Level 2 of the Terminal.

Is there a fee at the airport for using the shuttle? To get to Terminal 2, for example.

You can use the AirTran to get between Terminals, which is free.

I lost my luggage, what should I do?

Please contact your airline if it was lost after it was checked or on the plane. If it was lost in an airport public area, contact Lost and Found at 650.821.7014 or [email protected]

Where is currency exchange at SFO?

Unfortunately, currency exchange is no longer available in the airport.

Is there a currency exchange counter at SFO international?

There are currency exchange machines, but not an office at this time.

What is exchange rate at Travelex?

During the pandemic, Travelex currency exchange closed all of their US locations, including all airports. From our knowledge, they have not yet been replaced.

Which Terminal for Frontier?

Frontier uses the IN - International Terminal for both departing and arriving flights.

How long does it take to get through customs?

The wait for customs can really vary. The airport suggests that you check with your airline directly for your suggested arrival time. For international flights, most airlines recommend arriving three hours before departure.

Have a question about San Francisco Airport?

Yes. While the official name is San Francisco International Airport, it is also known as SFO.

San Francisco Airport is a major hub for United Airlines and a secondary hub for Alaska Airlines.

Given the size of the airport, parking is very close if you are willing to pay. Check out SFO parking rates to see what options are available for your travel dates.

Passengers are permitted to sleep in the airport. It remains open 24 hours a day and visitors can stay inside overnight. We also recommend these awesome SFO layover ideas.

Being one of the busiest airports, you can fly to many cities from San Francisco Airport. Check out our direct flights page to see where you can fly from the airport.