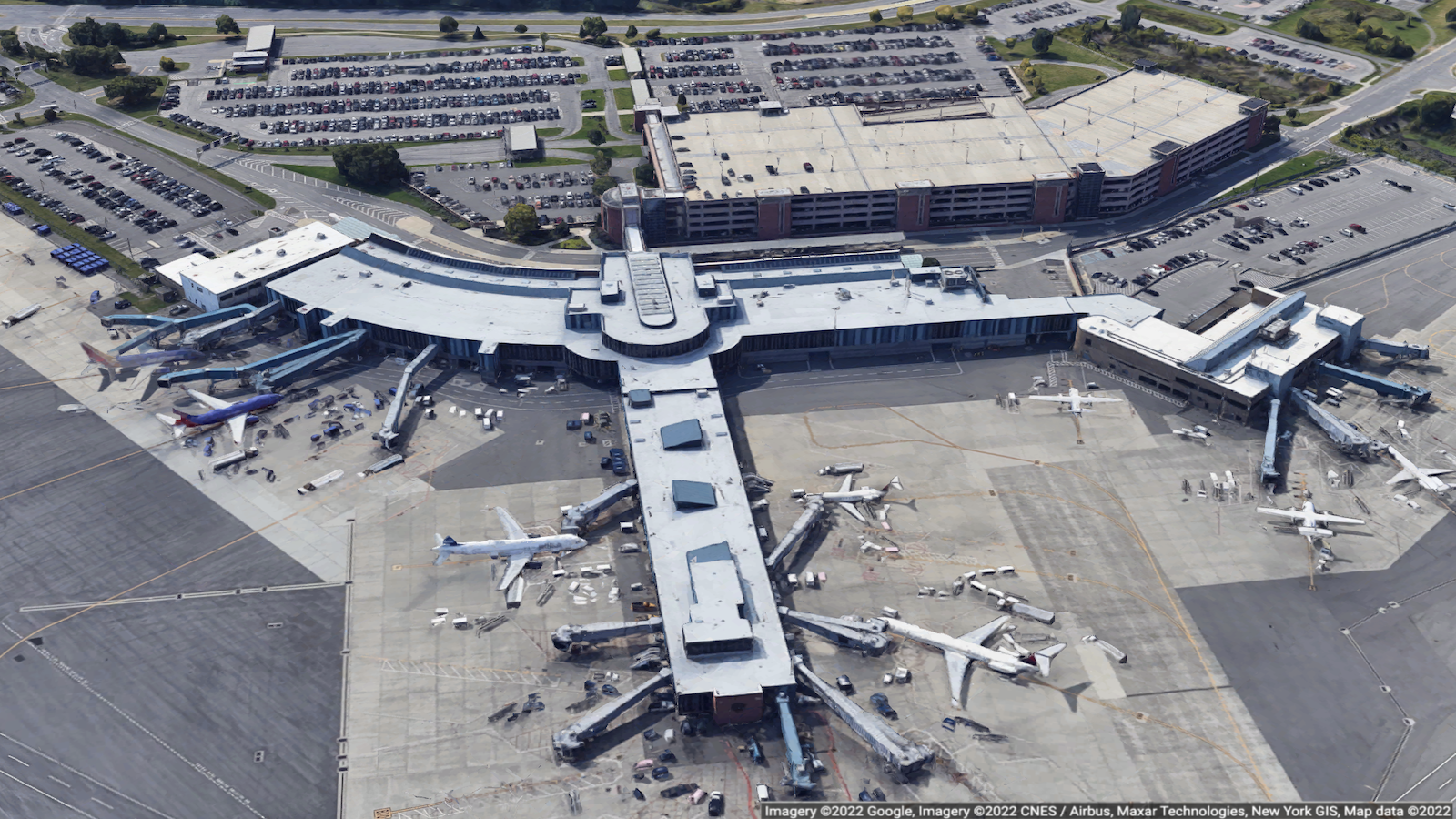 ALB airport is also a gateway to the spectacular Adirondack State Park, a huge region which includes a part of Lake Champlain, Lake George, Lake Saranac, Tupper Lake and a multitude of smaller lakes and mountains, making it an ideal vacation spot for weary city dwellers. It has a long runway, and is sometimes used as a diversion airport for major NY airports as it can land larger planes. 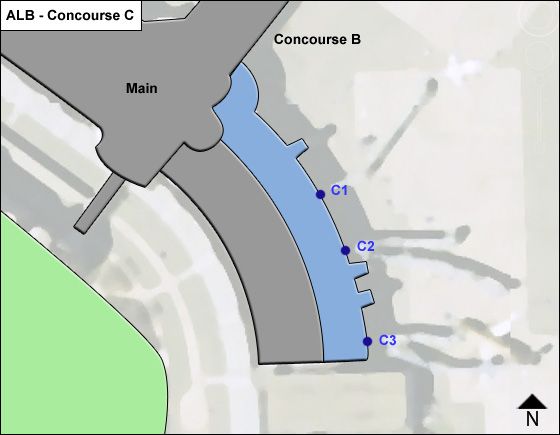 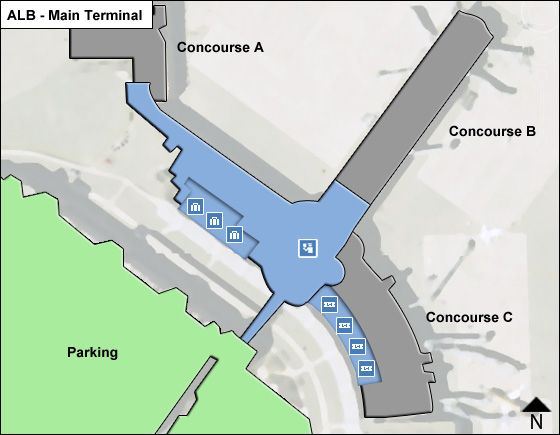 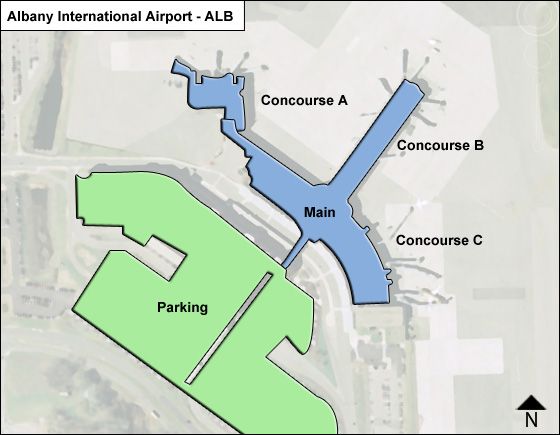 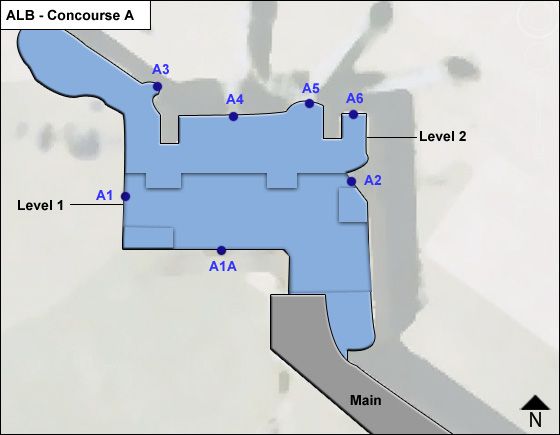 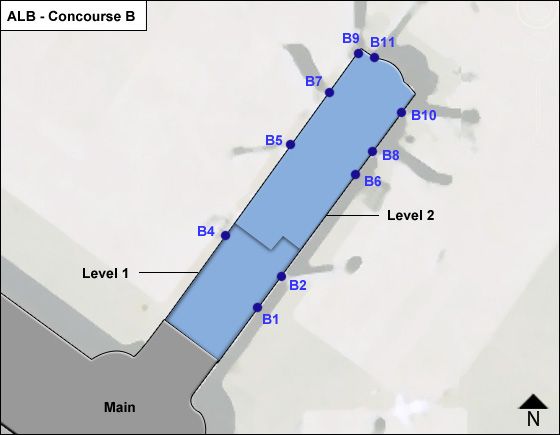 ALB airport has 3 concourses. Concourse A, Concourse B, and concourse C.

For more information, refer to the Albany Airport terminal map.

Located across the terminal on the first level of the parking garage. The short term parking is free for the first 30 minutes and $24 for a day.

It is located behind the parking garage, and has lots at the east and west ends of the terminal. Long term parking is $10 for a day.

Travelers have many options to choose from after arriving at the airport for ground transport to their next destination. Some of the transportation options include airport shuttles, car rentals, buses, and trains. In addition, many passengers also utilize cab services like Uber, Lyft, and taxis.

The rental car counters are in the terminal’s baggage area and the rental fleet is located in the parking garage. There are multiple car rental agencies onsite at the airport. Hertz, Enterprise, National, and other well-known car rental providers offer airport travelers a large variety of vehicles to choose from.

Passengers can opt for public transportation to travel from Albany Airport. Options include local bus or long-distance bus, as per their convenience.

Airport Shuttle Services are an efficient way to travel to and from Albany Airport. There are many different shuttle services, making it easy to get a ride to almost any nearby location.

Did you lose an item at the airport? Lost & Found.

How early should I arrive before a Delta flight leaves?

It is typically recommended to arrive at least 90 minutes before your scheduled flight.

Can I park in Albany International,NY, E lot in excess of 30 days?

We couldn't find a limit for parking days. You can call the parking information center at 518-242-2277 for more confirmation.

Is E lot open for parking?

How late do the airport shuttles operate?

The shuttles operate 24 hours each day.

What terminal will I use to fly out to Douglas North Carolina?

It will depend on what airline you are using to fly out with.

My flight was delayed with Delta last night so I rescheduled it to today. However, my luggage was already on the initial flight. How do I see if it arrived in Albany?

Please check with Delta Airlines about your luggage. The airport does not handle luggage inquiries.

How can I check if my luggage arrived?

We recommend for you to check directly with your airlines for any luggage questions.

Are masks required in the airport?

Masks are no longer required in airports or on aircraft. Please be advised that this can changed at any time.

Can disabled parkers with tag still use short term garage parking for 8 days at discounted $6 fee per day?

There is no longer a discounted rate showing for disabled parking.

Is the only $6 long term parking off Albany Shaker?

Yes, the only parking option with this rate is the Economy E-Lot located off of Albany Shaker Road.

Do you have any pre-paid discounts for someone wanting to parking for 3 days?

There are no pre-paid discounts for parking.

Is there a cell phone lot to wait for arrivals?

The cell phone lot is on the right-side of Albany Shaker Road, you will see it as you come up to the airport from I-87.

Are there shuttles to transport passengers from long term parking to the terminals?

Yes. The lots closer to the terminal are just a few minutes walk. But the economy lots on the other side of the airfield are all serviced by a free shuttle.

Show me the layout of the terminals

The layout can be found on the airport maps.

How do I reserve parking in the Economy E-Lot?

You cannot reserve parking at this airport, it all appears to be first-come, first-serve.

Do I have to reserve parking in the E-Lot?

No, you can pay when you get there.

How do we get a suitcase delivered that did not arrive on our flight?

Please contact your airline directly for any lost luggage.

Do you need to remove shoes at checkpoint, need to know if I need to wear slipon, I have a problem tying my shoes due to artificial hips

Yes, you do need to remove your shoes during the security screening process, unless you have special clearance.

What time should you arrive for your flight leaving Albany Airport?

According to the airport, it is best to arrive at least 90 minutes before your departure.

If our plane is delayed and comes in after midnight will there still be shuttle bus service from the airport to Economy Parking lot?

What is allowed on a carry on?

Here is more information on what is not allowed to carry on to the airplane.

When does Dunkin’ Donuts at Albany airport open in the morning?

Dunkin at ALB opens at 4am in the morning every day.

How often does the shuttle come in long term parking?

Most shuttle services in Albany Airport are available for short term parking which is mostly within 30 minutes window. However the Albany Park Ride Fly runs on demand and comes in to pick you up back to your vehicle any time of the day, but it's important to notify them of any long term parking.

How much does an extra baggage cost?

This could vary depending on the airline. Please check with yours directly.

What is the phone number for American Airlines baggage claim?

The phone number for American Airlines baggage claim is 800-535-5225. The call center is available for 24 hours, 7 days and the best time to easily reach them is by 2pm.

How much does it cost to bring an extra luggage bag?

Extra baggage fees is calculated based on fare class and specific route flown - and the policies of the airline you are using. However, a luggage that weighs more then 23Kg (50lbs) cost within the range of $50-$200 depending on the number of bags.

What is your zip code?

The Zip code for Albany International Airport is 12211.

How do I get updates on my lost/delayed luggage?

Contact your airline for updates on your lost or delayed luggage.

Who do I call regarding missing luggage?

You should contact your airline directly regarding any missing luggage. For other lost and found needs, you can contact the Albany International Airport Information Center at (518) 242-2299.

Is there a left luggage or a luggage storage at this airport?

We didn't find a luggage storage option available at this airport.

What time does the airport open. I have a 5:50AM flight what time is the earliest I can check my bag?

The Albany Airport is open 24 hours a day. However, the TSA security checkpoint opens at 4:00am each day.

Is the E lot open at Albany Airport?

The ALB Airport E lot was re-opened on 15 November 2021. The airport has indicated that they are working to update the website to reflect this.

How do EZ Pass customers get receipts for business travel when parking at Albany airport?

To get a receipt, you would just need to email park@albanyairport.com with your EZ Pass tag number and they will send you a digital receipt.

Where do I check in with my printed online ticket for flying with Allegiant?

Do you have luggage? If so, you would proceed to the Allegiant desk at the ground level. If you do not have luggage and you have the ticket (either on phone or paper), you can proceed to the gates by going up the escalator to the 2nd floor. There's only one area to go through security at Albany Airport so is easy to find. Safe travels!

Each airline (or their designated contractor) handles delivery of late luggage, so you must contact the airline you traveled on directly. For more specific information about the airport you can contact the guest services number at (518) 242-2299.

Where can I park for arriving passenger pickup?

Albany is a small airport, and pickup is easy. The free option is to wait in the cell phone parking lot, located just before you get to the airport on the southwest side of the runways. Or, you can use short term parking which is adjacent to the airport and reasonably priced if you are not there for too long.

I will be flying in on Jet Blue flight 88 on Oct 21. I will be using wheel chair. My Grandson is flying in on Southwest from Midway Chicago. Both flights arrive at approximately same time. My daughter will be coming in at 5:15 from Denver. Please suggest a spot we can all meet at.

Are there taxis available around 10.00pm.when my flight arrives?

Yes, taxis are available at that time and later. There are several flights that come in every night around that time (and after).

Have a question about Albany Airport?

The airport is six miles (9km) northwest of Albany, in Albany county.
Passengers are permitted to sleep in the ALB Airport. It’s opened around the clock and visitors can stay airside overnight.
The best time in terms of cost, to fly from Albany Airport is January, yes, the middle of winter!
There are various places you can visit from ALB airport. Check the list of direct flights from ALB.